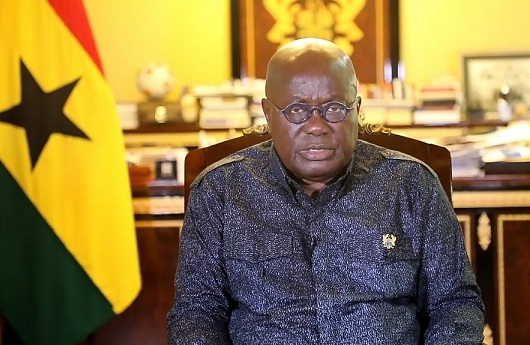 The government has released $100 million (about GH¢553 million) to enhance the country’s preparedness and response plan towards the prevention of the Coronavirus (COVID-19) should it rear its head.

The President, Nana Addo Dankwa Akufo-Addo, who announced this in a state broadcast yesterday, said the amount, which would be in Ghana cedi equivalence, was to finance the expansion of infrastructure, purchase materials and equipment, and conduct extensive public education.

In a live telecast, the President said with the declaration of COVID-19 as a pandemic by the global health body, World Health Organisation (WHO), Ghana must steps up its preparedness against the disease.

The preparedness, the President indicated, was to enable the country to move steps beyond the initial measures that had been put in place, so that a “whole of Ghana approach” is adopted in preparation for any outbreak within the country’s borders.

The new strain of coronavirus (COVID-19) was first reported in Wuhan, China, on December 31, 2019 and has since spread to 109 countries and territories.

Italy, with a population of over 60 million, where there is a large population of Ghanaians, has locked down the entire country, while the Chancellor of Germany, Ms Angela Merkel, has expressed fears that the virus would affect up to 70 per cent of the German population.

There are reported outbreaks in all of Ghana’s neighbouring countries, Burkina Faso, Cote d’Ivoire and Togo.

President Akufo-Addo, who recently visited the Kotoka International Airport and some hospitals designated for the management of the disease to assess their readiness, said Ghana’s entry points, such as the airports and land borders, continued to show satisfactory preparedness.

He said they were ready to screen all entrants into the country, with the Ministry of Health designating facilities that could hold infected persons, while regional hospitals were preparing isolation centres for holding suspected cases.

He gave the assurance that the country’s two main research institutions, the Noguchi Memorial Institute and the Kumasi Centre for Collaborative Research, which had the capacity to investigate and confirm or otherwise suspected cases of coronavirus infections, had been very supportive in that regard.

President Akufo-Addo noted that so far those two institutions had found that the 57 suspected cases, as of yesterday had all proved negative.

President Akufo-Addo last Tuesday ordered the suspension of all international travels by public officials, except for critical assignments which would have to be authorised by the Chief of Staff at the Office of the President.

He also asked all public officials to remain within the jurisdiction, until further notice.

Addressing the nation, he urged appointees and others to resort to video conferencing facilities and other technological tools whenever possible for international engagements.

The President disclosed that he had instructed further improvements of the protocols for in-bound traffic from already affected countries and urged Ghanaians to, as much as possible, desist from all foreign travels, except the most critical ones, until there was a firm grip on the spread of the virus.

President Akufo-Addo announced that the Ministry of Information had been tasked to lead a nationwide public education campaign on preventive measures to ensure the control of the spread of the infection, should the country record any.

He reiterated his March 6 call on Ghanaians to heed the advice by the Ministry of Health for citizens to revisit the custom of shaking hands, and stop doing so completely, adding that all Ghanaians must cover their mouths when coughing or sneezing.

The President appealed to civil society organisations, schools, universities, faith-based organisations and places of large public gatherings, such as classrooms, lecture halls, meetings, parties and funerals, to put in place mechanisms to caution and assist patrons on basic preventive measures.

“This fight, fellow Ghanaians, cannot be that of the government alone. It is for all of us. I urge the media to join this cause fully and help disseminate effective information on the dos and don’ts of the disease”.

“The information to be put out, however, must be that approved by health authorities and not just from any piece of literature found on the Internet, as false materials are already being spread from other jurisdictions,” the President urged.

The President gave the assurance that the government was analysing the potential impact of the COVID-19 pandemic to the local economy and would trigger the relevant responses to minimise it.

Touching on the production of the logistics required to prevent and combat the virus, the President revealed that the government had begun engaging with the domestic pharmaceutical industry to assist in that regard.

“Indeed, we must take advantage of this crisis to strengthen our domestic productive capacity, so we can advance our self-reliance, and reduce our dependence on foreign imports. Necessity, they say, is the mother of invention,” President Akufo-Addo added.

He extended his appreciation to the WHO, the World Bank, the International Monetary Fund (IMF) and friends of the country for the assistance they had so far provided, and for the pledges made in support of Ghana’s fight against COVID-19.

“We shall continue to work with them to defeat the spread of the virus. I am confident that, together, with all hands on deck, we will be successful in weathering this storm,” he added.