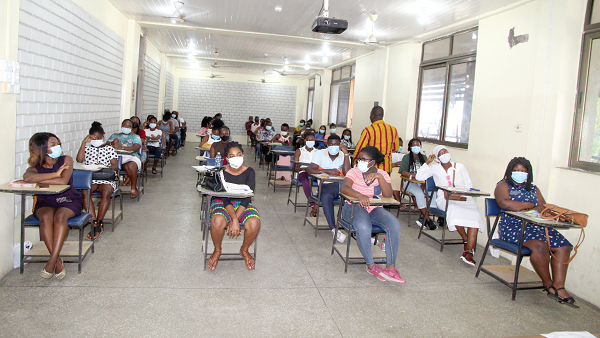 Some freshers at the African University College of Communication taking their first lectures at the campus of the univeristy. Picture: ESTHER ADJEI
30.5k Shares

Registration of freshers into the various universities in the country entered the second day yesterday as they continued to go through the exercise at the various campuses with full compliance with the COVID-19 health protocols.

In an interview, the Business and Administration Manager at the African University College of communication, (AUCC), Mr Samuel Ogyiri Sackey, stated that the registration process had been smooth so far because students were only visiting the campus to pay their fees and take their photographs, then follow the rest of the registration process online which students were doing smoothly alongside departmental orientations before lectures could begin.

He announced that the overall orientation would be done in two weeks’ time and “we look forward to admitting a total of 600 freshers out of which 450 have already been admitted,” he stated.

On accommodation, Mr Sackey said the location of the school at the centre of Accra made it difficult for students to get hostel facilities but said the school had contacted  private hostel owners and their contacts had been given to students to find accommodation when they needed it.

The story was no different from the Ghana Institute of Journalism (GIJ), the Assistant Registrar, Public Affairs, Mr Daniel Machator,  stated that though there had been an initial challenge in the registration of the freshers due to a break down on the school portal, “the challenge has been resolved and the process is smooth now”.

He said the time table for both the continuing students and the freshers had been given out to the students.

“There has been little challenges relating to the registration portal but we have resolved them and the registration process is going on smoothly. We are looking forward to admitting 2,500 freshers for the new academic year,” he stated.

Speaking on data challenges for online learning, Mr Machator started that the school had provided free WIFI on its two campuses and so students were to use that to facilitate their online lectures.

In relation to accommodation challenges, Mr Machator said the school was a non-residential school, but added that provision had been made by the school for private hostel facilities for students who required it, but gave the assurance that the school had plans of building its own hostel facilities in due course.

Mr Machator, said orientation for the freshers had been completed and lectures had already begun at the new campus at Dzorwulu, while the continuing students were retained at the Osu campus.

He said the school would run a blended form of lectures of online and face-to-face to ensure that the social distancing protocol was observed, “while we do our best to make sure, students visiting the campus wash their hands and use their nose masks”.

At the Accra Technical University, the Snr. Assistant Registrar and Acting Director of the Public Affairs, Mrs Foster Kilian Ganaa Kodua, stated that registration process had so far been smooth, because the school did not allow the admitted students to come to campus for registration but were given all necessary details for registration to be done online.

“The registration process is totally online, students are to enter into their portals and register for their courses while new students are to create their personal account as soon as they resume. Our freshers have however not resumed yet.

“When they resume on January 15, 2021, they will be required to go through the online process of registration,” Mrs Kodua said.

She said a desk would be mounted at the forecourt of the school to assist freshers that might find difficulties in using the online portal, explaining that the students were mostly encouraged to use their smart phones to do the online registration.

Mrs Kodua said the school was hopeful to admit about 7,500 freshers to start the new academic year.

She said the school would be running a semblance of a double track system when lectures resumed, of which students would do one week online while another group would do one week face-to-face and swap after that week to do online and vice versa.

Mrs Kodua gave the assurance that a wireless internet system would be deployed on the campus for students to access to aid them in the online lectures.

On accommodation, she said that had not been a problem because the institute had its own hostel facilities, while arrangement had been made with private hostels so that interested students would have the option as to which of the hostels to lodge when academic work resumed.