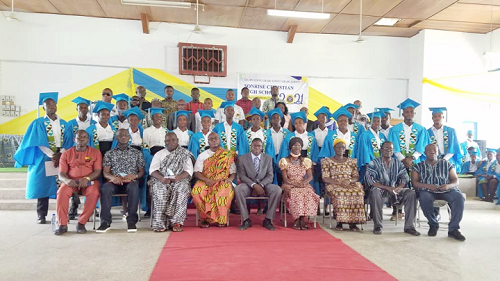 Some of the graduates and the school authorities Follow @Graphicgh

Graduates of senior high schools have been advised to take the risk in developing their creativities as they could become problem solvers to their generation.

A Hospitality and Events Management Lecturer at the Ho Technical University, Mr Vincent Kwaku Asimah, who stated this, said youngsters must be encouraged to be exceptional with their thinking and potential to solve world problems even at their young ages.

Speaking at the 13th graduation day of Sonrise Christian High School at Adaklu in the Volta Region, on the topic: “Recognising opportunities and taking advantage of it is key to success in life’’, Mr Asimah said the youngsters must be encouraged to take risk in developing their full potential by taking advantage of opportunity that might also come their way through their experimental period.

According to him, it was always more important to take risk and learn from mistakes than to lose a lifetime opportunity for failing to take a risk.

As youngsters, he said they needed to develop their heroism in identifying and taking opportunities through careful observation of trends, trying to solve problems or challenges and identifying gaps in the sphere of life.

“Each day, the opportunities that fly across people are so many, but why some people do not take advantage of them is because they do not see them as opportunities,” he said.

According to him, by virtue of age, as second cycle school graduates, that was the right time for them to identify themselves well and become achievers, while they were about to enter tertiary institutions or choose their careers.

The lecturer urged the youngsters to present their real unique self to the world in their endeavour to achieve success, adding that, “never allow the political, economic, social, technology and legal forces to derail your high spirit,” he said.

The ceremony saw the graduation of 184 students who completed the SHS, where those who distinguished themselves were awarded.

The best performing student among the 2020 graduating class, Master Prince Dogbatey, who scored A1 grades in four out of the eight subjects, received the Richmond Best Student Award of a USD$700 tertiary education scholarship package.

The administrator of the school, Mr Samuel Dzamesi, said the school had maintained its lead among private schools in the country, with 70 per cent of its graduates qualifying for admission to tertiary institutions.

According to him, despite the challenges that private senior high schools faced in current times, Sonrise Christian High School, with enrolment of 578 students, continued to be a pacesetter in the provision of quality private education in the country.

Mr Dzamesi disclosed that the school had qualified for the national Science and Maths Quiz for the fourth year running and had qualified to the 1/8th stage of the competition.