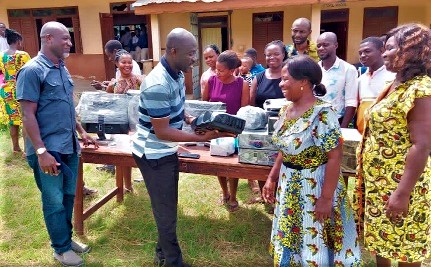 The 1995 Year Group of the Nkwatia Presbyterian Junior High School (JHS) in the Eastern Region has donated five desktop computers and a projector to the school to facilitate the teaching and learning of Information and Communications Technology (ICT).

The President of the year group, Dr Dickson Okorie Mireku, assisted by Benjamin Kwesi Opoku, Oppong Adade Koranteng and Linda Ofosu, presented the items to the Headmistress of the school, Dorcas Otchere, and the Chairperson of the Parent-Teacher Association (PTA), Rebecca Opoku.

Speaking to the students at a short ceremony for the presentation, Dr Mireku told the learners that it did not matter where they would start off in life and that the fortunes of life would smile at them if they persevered.

“We thought it wise to give back the good we received during our formative years in this school, and that’s why we’re here today to present this token,” he said.

For his part, Mr Opoku advised the students to be diligent in their studies since there were several distractions militating against the modern-day student.

He recounted how in the early 90s, students were lashed when seen at a wake, noting that the trend had changed now due to the promulgation of new rules by the Ghana Education Service.

He cautioned the students, mainly the females, to be wary of men and avoid going out at night, specifically during festive seasons, and to remain focused.

He said the items presented would help them in effective teaching and learning.

Mr Oppong advised them to struggle to acquire all the fundamental IT skills which would transform them into global players.

For her part, Ms Ofosu reiterated the point that she, like her mates, had begun her education in the primary and moved to the JHS, but she did not stop there.

Therefore, she said it was inexcusable for any of them to relent and not strive to move higher on the academic ladder or in life’s pursuits.

The PTA Chairperson, Ms Opoku, prayed for the blessings of God to be multiplied on all the ’95 Year Group members.

She assured them that she, together with her team, would do all in her power to train the children as God and mankind would expect her to.

Ms Otchere gave an assurance that the items would be put to good use to ensure that the students did not lag behind in anyway in their education, especially in ICT.

They commended the group for its benevolent support given to the pupils and further called on all former students of the school to support their alma mater.