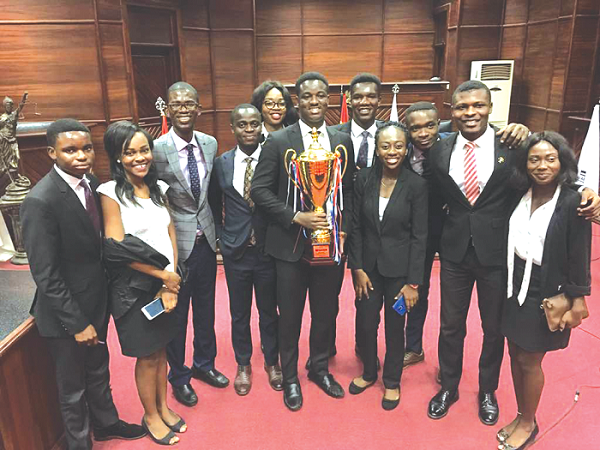 The proud winners of the Moot Court contest from KNUST.

This was after it defeated the University of Cape Coast (UCC) team to become the first law faculty in the country to successfully defend the title it won last year.

By this enviable feat, the KNUST Moot Court team has qualified to represent Ghana at this year’s White and Case International Rounds of the Jessup Moot Court scheduled to take place in April in Washington DC.

In an interview, the President of the Law Students’ Union of the KNUST, Mr Noah Adamtey, disclosed that the team won four out of their five contests and went ahead to win the ultimate prize in the final competition.

He said the KNUST Moot Court team won the 2017 competition and represented Ghana at the White and Case International Rounds Competition held in Washington DC, where it emerged the second highest ranking team from Africa.

Mr Adamtey explained that the Moot Court allowed law students to act as lawyers and argue on a hypothetical case before a panel of judges who might be judges or lawyers.

According to him, the panel of judges would then look at the advocacy skills of the participants, their knowledge in law, the facts presented, their posture and composure, and above all, the confidence with which they answer questions posed to them.

Surprisingly, the UPSA Moot Court team which participated for the first time, put up an impressive performance during the contest. The team, made up of Thomas Kojo Quansah and Gilbert Kekeli Dzeketey as well as their oralists, Ms Hannah Audrey Arthur and Lois-Annie Brown, took the third place for an excellent written memorial.

The theme for this year’s competition was: “Validity of Inter-State Arbitrations; the Legality of the use of Autonomous Underwater Vehicles to gather data from the Territorial Seas of Foreign States, and the obligation of states to comply with their Nuclear Disarmament Obligations Under International Law”.

The final round of the contest was judged by a three-member panel which was chaired by a Justice of the Court of Appeal, Her Ladyship Justice Gertrude Torkonoo. Other members of the panel were Mrs Marietta Brew Appiah-Oppong, a former Attorney-General and Minister of Justice and Dr Kamel-Deen Ali, the Legal Director of the Ghana Navy and Executive Director of the Centre for Maritime Law and Security in Africa.