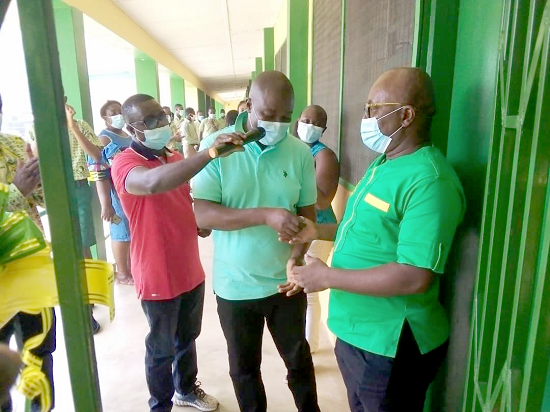 The 1997 year-group of the Ghana Senior High School (GHANASS) in Koforidua in the Eastern Region, has urged the headmaster of the school not to include students who take part in the National Science and Maths Quiz in other activities not related to the competition.

That, according to the group, would enable them to study and prepare adequately for the quiz to win the ultimate prize.

GHANASS, although one of the best grade ‘A’ schools in the country has never gone past the quarter-final stage of the Science and Maths Quiz competition since it was instituted over two decades ago.

The group made the suggestion to the Headmaster, Mr Jacob Kwamena Afful, when its members participated in the inauguration of the school's Science and Maths Quiz Secretariat last Saturday at the school.

The Global President of the GHANASS Old Students Association (GOSA), Mr Emmanuel Poku-Sarkodee, who is also a member of the 1997 year-group said although GHANASS was one of the best in the country, its students participating in the quiz had not gone past the quarter-final stage.

He added that on some occasions, they did not even get to that level, a situation Mr Poku-Sarkodee described as worrying to GOSA.

Mr Poku-Sarkodee indicated that to reverse the current situation, the 1997 year-group had decided to refurbish the secretariat of the school's Science and Maths Quiz.

He said the year-group would at the same time, monitor future participating students of the competition and render the necessary support to enable them to do well during future competitions.

That, he believed, would fully equip the students to win the ultimate prize.

The Chairman of the Project Committee for the Science and Maths Quiz Secretariat and a member of the 1997 year-group, Mr Kingsley Ofosu Ntiamoah, was not satisfied with the performance of the school in the competition.

He was, however, hopeful that with the motivational support of the year-group, the school would at least, reach the semi-final stage of the competition next year.

"Our target is to win the ultimate prize or at least be in the semi-final next year. Schools such as Achimota, PRESEC, Legon, among other schools, are not better than GHANASS, so let us put up our best to beat all the schools and win the trophy,” Mr Ntiamoah said.

For his part, Mr Afful commended the year-group for their support and assured them that the students picked to take part in the competition would be given preferential treatment as requested by the year-group.

Such preferential treatment, he said, included the provision of special meals, exempting them from taking part in activities other than studies and preparing them adequately for the competition.