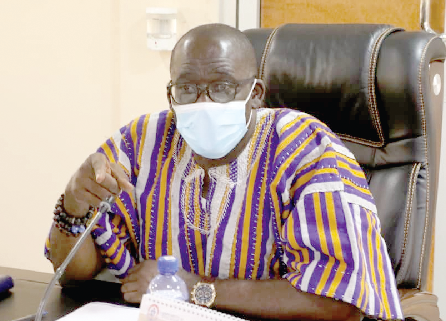 The Pro Vice-Chancellor of the University of Education, Winneba (UEW), Professor Andy Ofori-Birikorang has been appointed as the acting Vice-Chancellor (VC) of the university.

He takes over from Rev. Fr Professor Anthony Afful-Broni whose tenure officially ended on September 30, 2021.

Per a letter dated October 1, 2021 and signed by the Chairman of the UEW Governing Council, Nana Ofori Ansah I, it officially informed Prof. Ofori-Birikorang that the substantive VC of the university ended his term of office and retired from active service on Thursday September 30, 2021.

The letter noted that with effect from Friday, October 1, 2021, the university has no substantive vice chancellor as no one has been appointed yet.

“In the premise, section 14 (2)(b) of the University of Education, Winneba Act , 2004 (Act 672) and statute 10(21) of UEW statutes (2020) are invoked to mandate you to act as vice chancellor of the university effective today, October 1, 2021 until the appointment of a substantive vice chancellor,” the letter said.

It stated further, “be reminded that the terms and conditions of service of this new office remain the same as those covering your position as Pro vice chancellor in the university.

“As the chairman of the governing council, I wish you the best in your new role albeit on an interim basis,” the letter concluded.

At his first meeting with management after the appointment, Prof. Ofori-Birikorang said management had been ushered into a new phase “where things will be done differently,” adding, “unity, reconciliation and inclusion will be a key focus of his tenure as acting VC”.

He said, “all of us were part of the previous management headed by Rev. Fr Prof. Afful-Broni and that not much by way of continuity of policies and projects will change.

“We are going to continue with what we have been doing in a very aggressive and progressive manner but more importantly, we need to be united and bring everybody on board so that everyone is satisfied with the system,” Prof. Ofori-Birikorang indicated.

He reiterated the need to focus on the core business of the university in a much progressive, prudent and intensive manner, stressing, “I wish to assure the university community and all other stakeholders of the prudent management of the university’s resources for the benefit of all”.

“As a new management, we are not going to ensure reconciliation that will bring some people on board, while others are marginalised and that even if I am going to act for a few weeks, this will be our guiding principle and victory shall be ours as a university,” he noted.