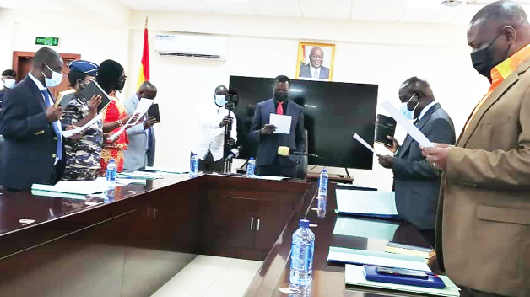 Dr. Yaw Osei Adutwum (3rd from right) swearing in the board

He charged NaSIA to help private schools understand why accreditation and licensing were taking place and how it could help them become better.

Dr. Adutwum explained that it was necessary for all private schools, even if they were top performing ones, to add value to their schools, so NaSIA should not just go there to collect fees for the organisation.

Dr. Adutwum stated this when he inaugurated an 11-member governing board of the NASIA chaired by Professor Eugene K. M Dartey in Accra.

The board has Dr. Charles Yeboah, COP Yaa Tiwaa Addo-Danquah as the minister's nominees and the Inspector General of NaSIA, Dr. Hilda Hagar Ampadu; a representative from the National Teaching Council (NTC), Dr. Christian Addai-Poku, and a representative from the National Council for Curriculum and Assessment (NaCCA), Mr. John Mensah Anang, as members.

Representatives from the West African Examinations Council (WAEC) and Technical, Vocational Education and Training Service (TVETS) are yet to be nominated.

The NaSIA is mandated by the Education Bodies Regulatory Act 2020, (Act 1023) to develop, publish, promote and enforce the highest quality standards in guideline for quality education in both public and private pre-tertiary schools.

Dr. Adutwum added that "the authority is also responsible for licensing all pre-tertiary schools.”

He reminded the NaSIA of the herculean task ahead to meet the President’s vision of creating a 21st century school system that would make Ghana competitive with the rest of the world.

He urged the board to ensure that NaSIA prioritised schools where there was a great sense of urgency to ensure that children in those schools did not fall out along the line.

He expressed worry that 48 schools at the secondary level had one per cent pass rate and “this should concern you. Your work does not begin and end with you. Your work begins by looking at academic accomplishment in our schools from the Ghana Education Service (GES).”

He further stated that there was a school with zero per cent pass rate for the last three years, “and such a school you should inspect immediately.”

He announced that the authority had received World Bank support to enable it to inspect more schools, “but I need you to prioritise schools where there is a great sense of urgency because if nothing is done, the future of those children will be dire.”

He noted that the schools under trees phenomenon was a sign of poor oversight and planning charging NaSIA, "to help us by giving us critical data of schools and their facilities and what the government needs to do about them" .

The minister, therefore, charged members of the board to get involved in the operationalisation aspect of the government’s school development.

"Building a school is the easy part when it comes to educational delivery, but making the school operational is the next daunting task," he reminded the board.

He said for instance that it was unacceptable for schools to reopen when a school did not have a head teacher and, therefore, charged NaSIA to get a checklist to assure the ministry that schools were ready to reopen.

"NaSIA, you are our eyes and ears on the ground in the schools and I assure you that any report that you bring, will be acted upon," Dr. Adutwum said.