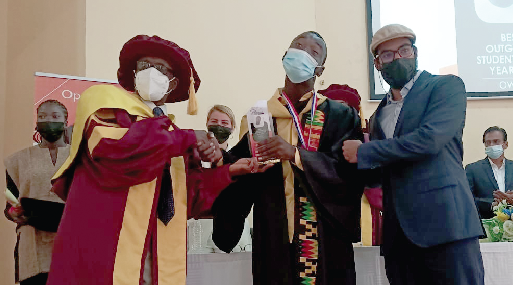 Members of an elated family could not hold back their tears when their son, Edmond Owusu, who has been suffering from cerebral palsy from birth, clinched the Outstanding Student of the Year award at the 2021 graduation ceremony of the OpenLabs Ghana (formerly NIIT), an information technology institution.

The family shed tears of joy for the 21-year-old IT enthusiast, who, regardless of his condition, defied the odds and stood above social and economic impediments to fulfil his childhood desire of becoming a software engineer.

After completing senior high school (SHS) four years ago, Edmond undertook a professional course in software engineering at the OpenLabs Ghana in Accra in 2018.

With determination, he successfully completed the programme with flying colours to the surprise of his mother and twin brother, who initially feared that his condition could impede his progress.

By the end of his programme, Edmond had singlehandedly developed two application softwares; Virtual pay, a payment platform, and Tredhost, a hosting site.

It was a moment of celebration at the Institute of Statistics, Social and Economic Research (ISSER) auditorium, the event venue, last Saturday when the gathering received Edmond with a standing ovation and applauded him for achieving what appeared an impossible milestone.

The applause became louder and persisted for about five minutes when it was announced that the celebrant was not only one of the best students in his class, but had also successfully developed two softwares.

"If I'm standing here today, it is not by might but by the grace of God. I thank you all for the love you have shown me," Edmond said to a thunderous applause.

A total of 70 students graduated at the event.

In an interview with the Daily Graphic after the ceremony, Edmond's mother, Ms. Joyce Addy Laryea, said she initially did not support his son's decision to pursue the IT course because of his condition.

"I didn't support his decision at the beginning because of how challenging it was for him to complete SHS. Before I could say Jack, he had used his own savings to buy the admission forms. That proved to me that he was determined.

“I could not afford his admission fees because I am raising five other siblings in addition to him. So we approached the school and appealed to them and they agreed to do a special arrangement for us," she said.

She added: “I stand here today as a proud mother. People look down on him but he is the one who has brought joy to this family."

It is the dream of Edmond's mother that her son would become a leading brand in software engineering in the country.

In a separate interview, the Director of OpenLabs Ghana, Dr. Sujith Jayaprakash, described Edmond as an amazing student, adding that the institute was proud to have had the opportunity to support him to realise his potential.

“A lot of companies want to recruit him but Edmond is interested in doing his undergraduate.

I appeal to the universities to identify this talented kid, and then give him the opportunity to pursue a degree so that he can progress further,” he said.