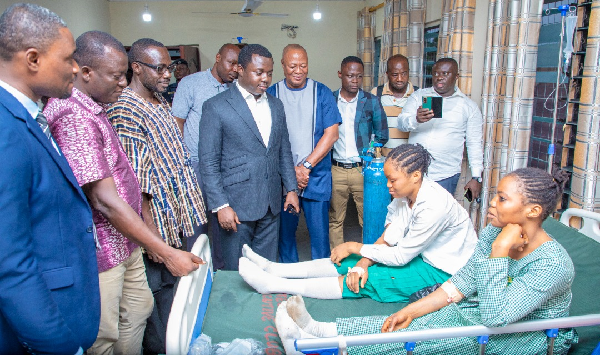 Twenty-two out of the 38 students of the Islamic Senior High School in the Ashanti Region who were hospitalised on Monday after a protest by the students turned violent have been discharged.

The police were alleged to have used tear gas and fired live bullets at the students, causing the injuries, and leaving others with respiratory discomfort.

A press statement by the Ministry of Education after Deputy Education Minister, John Ntim Fordjour visited the school on Monday night said calm has returned to the school, and that all the injured students are currently safe and responding to medical treatment.

“Out of the thirty-eight (38) students hospitalised, twenty-two (22) have been discharged and have joined their colleagues on campus,” he stated.

This was contained in a statement issued by the Ghana Police Service.

According to the police, "even though nobody was hit by a bullet, the Police handling of the incident was poor and fell short of our standard operating procedure on crowd control.”

“As a result, the Deputy Regional Police Commander, DCOP/Mr Kwasi Akomeah Apraku, who was acting as the Regional Commander has been removed from his position and has been interdicted. Two other officers, ACP/Mr George Ankomah, the Regional Operations Officer, and ACP/Mr Alex Cudjoe Acquah, the Suame Divisional Police Commander, have also been interdicted to make way for a thorough investigation into the incident,” the statement from the police added.

Police further added in the statement that, the Police Professional Standards Bureau (PPSB) has commenced a full-scale investigation into the conduct of the officers who were responsible for the Police response.

Read a statement issued by the ministry on the matter below:

The Ministry of Education has been duly briefed on the unfortunate incident that occurred on the campus of the Islamic Senior High School in Kumasi on Monday, June 13, 2022.

The Ministry regrets the rather unfortunate incident, which resulted in 38 students seeking medical attention and the temporary disruption of academic work.

The Ministry of Education would like to assure the public that all the affected students are responding to medical treatment and are in good condition.

Out of the thirty-eight (38) students hospitalised, twenty-two (22) have been discharged and have joined their colleagues on campus.

We would like to assure parents and guardians of the safety and security of their wards, as full academic work starts on Tuesday, June 14, 2022.