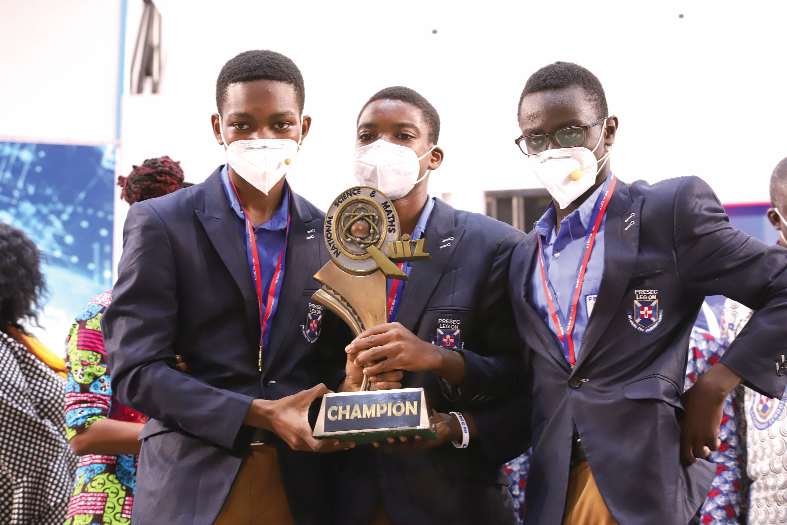 In a contest that pitted three boys’ schools from three different regions and belonging to three Christian denominations against one another, it was PRESEC which showed its mastery in the contest

In a tweet, the President, Nana Addo Dankwa Akufo-Addo, congratulated Presec for emerging victors in this year’s contest.

“Winning number six makes them the undisputed kings of the competition. Thoroughly well deserved, I look forward to welcoming them to Jubilee House soon,” the President said.

On their way to winning the contest, Presec led in all the rounds, except the third round (problem of the day), of the competition, which took place at the Cedi Conference Centre of the University of Ghana, Legon.

All the three schools had come into the contest with a plan to win.

‘Let’s talk about six’ was Presec’s slogan; ‘We win in election years’, Adisco claimed, referring to the fact that their only win came in 2016, while OWASS had the slogan: ‘It’s time for trinity’.

In the end, though, it was Presec that made its intention clear right from the start, jumping into the lead with 14 points in the first round, as against seven by ADISCO, which came second in the contest, and 14 by OWASS.

With past and present students of the various schools thronging the venue for the contest to cheer on the representatives of their schools as they responded to the questions, supporters of Presec threw caution to the wind to celebrate their victory, ignoring the COVID-19 safety protocols of social distancing and the wearing of face masks.

“We told you guys that the trophy was coming back home to where it belongs,” one past student of PRESEC told his friend, an Adisco old student.

For winning a historic sixth trophy, PRESEC took home GH¢40,000, while the contestants received GH¢20,000, with the teachers who prepared them receiving GH¢20,000, all from the Ghana Education Service (GES), which sponsored the grand prize.

The first prize of GH¢5,000 for the Eugene Arhin Speed Award went to Presec, which also took GH¢10,000 for the Airteltigo Highest Scorer award.

The Eugene Arhin Speed Award for the third placed school, valued at GH¢2,000, was also presented to OWASS.

The Aburi Presbyterian Senior High Technical School took the 2020 Dr Kwaku Mensa-Bonsu Award of GH¢7,000 for the Most Impressive Run.

The same school took the Jacob and Elizabeth Banful Memorial Award for the Most Impressive Run, valued at GH¢7,000.

As part of the prizes, the Academic College of Medicine is offering a full medical scholarship, worth $75,000 (for six years of study) to any member of the nine schools which competed at the semi-final stage of the competition.

This year’s NSMQ nearly suffered a jolt when the Conference of Heads of Assisted Secondary Schools (CHASS) said it was going to be difficult for schools to organise their students for the contest due to the lack of funds.

Again, the outbreak of the COVID-19 pandemic resulted in the postponement of the quiz, which should have been held between June and July this year.

However, it was shifted to September and October, with the observation of all the safety protocols of the COVID-19.

The NSMQ is organised by Primetime Ghana Limited and sponsored by the GES, in partnership with Absa Bank.

In an address, the Managing Director of Primetime, Nana Akua Ankomah-Asare, said the organisation of the completion in the COVID-19 era had demonstrated the resilience of the company.