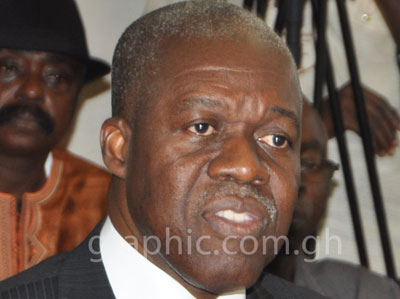 Vice-President Kwesi Bekoe Amissah-Arthur has asked students studying under the government scholarship to concentrate on the courses they applied to study.

He said his attention had also been drawn to the fact that most of the students offered scholarships to study abroad, particularly those offering programmes in oil and gas, had been taking what he described as the “easy path by studying oil and gas secretariat courses.”

“People are not doing the oil and gas curriculum we paid for. If it is those rare skills then you don’t have any morale right to demand for automatic jobs,” he stressed.

Mr Amissah-Arthur was answering questions from students when he met tertiary students undergoing various studies in oil and gas and engineering on government scholarship in Istanbul, Turkey, on Thursday.

This was on the fringes of the 16th Eurasia Economic Summit in Istanbul in Turkey.

He asked them to disabuse their minds that there would be automatic jobs for them after completing their courses, stressing that foreign students would not be given any privileged considerations in respect of getting a job on the basis that they studied abroad and that seeking for jobs would solely be on  merit.

He added that “the oil and gas industry will be expanding in Ghana but you still have to work hard to get employment in those sectors.”

“You have an added advantage over your colleagues who are studying back at home, so if you concentrate on your studies and work hard, you will be able compete favourably with anybody and get your job on merit,” he told the students.

Mr Amissah-Arthur said the Ghanaian economy was expanding very fast and that the service sector required people with skills, adding that “we have to look at the possibility of creating for ourselves to enable us remain on the job market.”

On the delay in the payments of stipends to the students, Mr Amissah-Arthur said “as much as possible, we will ensure that your stipends reach you on time.”

He said there were other nationals who were aided by Ghanaians to use the Ghanaian passport to commit various crimes, adding that travelling certificates (TCs) could not be substitutes for passports.

He urged Ghanaians who had lost their passports to report to the police immediately for a replacement.