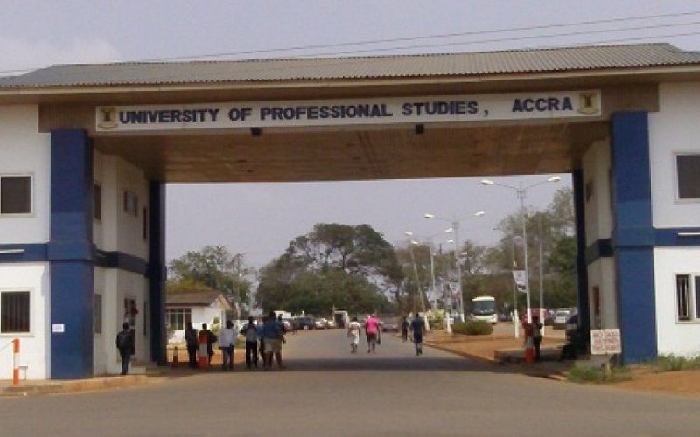 A notice dated November 23, 2021, posted on a notice board on the UPSA campus said the two female students also engaged in sexual activity where they fondled each other in acts described as lesbianism.

No report of 'lesbianism expulsion before management' - UPSA

“Engaging in acts of lesbianism is contrary to Section 1.28.11(g) of the Student Handbook of the University of Professional Studies, Accra; 2018 and Schedule G 8.3 (23) of the Statute of the University," the notice signed by the Deputy Director BDC, Robert Gyeke-Darko said.

“They have since been dismissed from UPSA Hostel awaiting further sanctions from Management,” The notice with Ref: RGD/LO/UPSA.018 stated.

The notice further warned, "all resident students to particularly avoid harbouring perchers, accommodating visitors beyond 10 pm, desisting from sexual misconduct and observing all other rules and regulations in the Hostel as well as the Student Handbook". 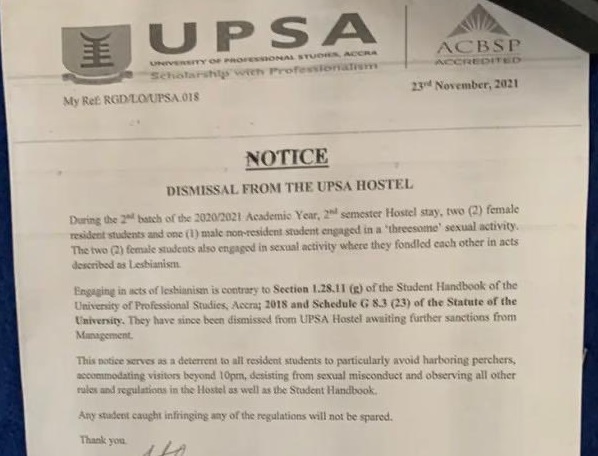 "You are hereby by this letter dismissed from the Hostel with immediate effect. This means, you cannot book and stay at the UPSA Hostel throughout your student life at the University". the letter dated November 22, 2021 and signed by the Director - BDC, Dr Albert Martins with the Reference: AM/LO/UPSA.001 stated.

The letter was copies to the Hostel Manager, Head Porter, Head of Security, J.C.R. Parents [of the affected students] and File.

Meanwhile, the school in a press release dated November 24, 2021, signed by its Registrar, Dr Koryoe Anim Wright has urged the public to disregard the notice because it did not follow the approved procedure for communicating such decisions.

"The Vice-Chancellor of UPSA is the Chief Disciplinary Officer, and all decisions taken by the Vice-Chancellor are communicated through the Registrar. Any disciplinary communication that does not follow the above procedure is not authorized by Management and should therefore be disregarded," the statement said.

"The University further states that no disciplinary report on the alleged incident is before Management for final decision. Members of the Public are therefore advised to disregard the story".

Read also: No report of 'lesbianism expulsion before management' - UPSA