Street hawkers at Accra’s central business district back with impunity 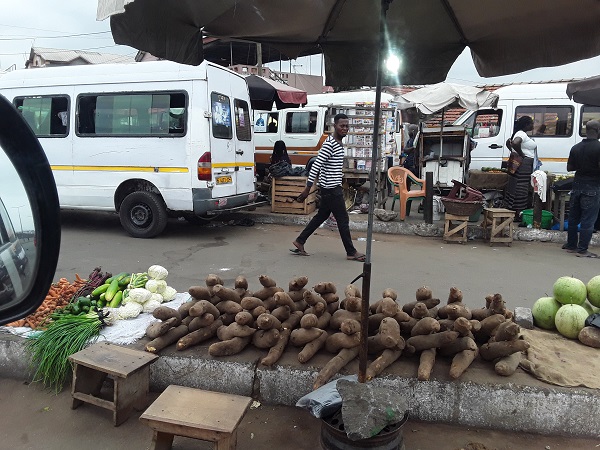 It looks like Accra city authorities are not winning the war against street hawkers.

Early this year, the Greater Accra Regional Minister, Henry Quartey, and his team decongested the streets of Accra, pulled down illegal structures and relocated those traders whose business activities created heavy vehicular traffic within the central business district (CBD).

That action came as good news to most shop owners whose frontages had been taken over by some of the hawkers without their permission, making it difficult for customers to manoeuvre to buy items displayed in the shops.

Besides, the decongestion came as a big relief to both private and commercial drivers, as they could access the dual carriage road leading to the CBD without any frustration by hawkers who sold just anything on the main streets.

Meanwhile, the regional minister had stated clearly during various press briefings that the action formed part of the government's agenda to decongest the streets of Accra.

It would be recalled that before the Easter festivities this year, the minister had told the press that his outfit had teamed up with the Ghana Armed Forces to train about 1,000 men to be deployed to help implement sanitation bye-laws across the region.

According to him, the task force of 1,000 members had been formed to ensure that traders operating along the streets of the CBD complied with the sanitation bye-laws.

He also indicated that recalcitrant traders caught hawking along the streets would be arrested and prosecuted after the Easter festivities.

It is four months after Easter and the hawkers are back on the streets, doing business aggressively, in total disregard for incoming vehicles and pedestrians.

The dual carriage road from Accra Brewery through Farisco towards the Accra Regional Police Headquarters had been taken over by hawkers, making a drive to the CBD a daunting task.

Hawkers display their wares on the pedestrian walkways, forcing people to compete for space with vehicles on the roads, at a risk to their lives.

We all know that these days the prices of fuel are high and it is not funny at all having to burn fuel in the course of a journey that should ideally take a few minutes.

The median of the road from Adjabeng through to the Kantamanto area was cleared recently and ornamental plants planted and wire gauzes put around them, but they have all been removed and the hawkers have taken over the medians to trade.

The Mirror would like to call on the city authorities to move into action once again, as they did at the beginning of the year, to bring sanity to the CBD, otherwise by Christmas the situation would get out of hand.

Those who create filth and sit in it to sell their goods should equally be prosecuted to prevent any communicable diseases.

The 1,000 men who were trained by the military should be deployed constantly at vantage points in the city to enforce the bye-laws, while the traders should be made to move into the satellite markets for their trading activities to let traffic flow at the CBD.