BY: By Shirley Asiedu-Addo
Category: Lifestyle 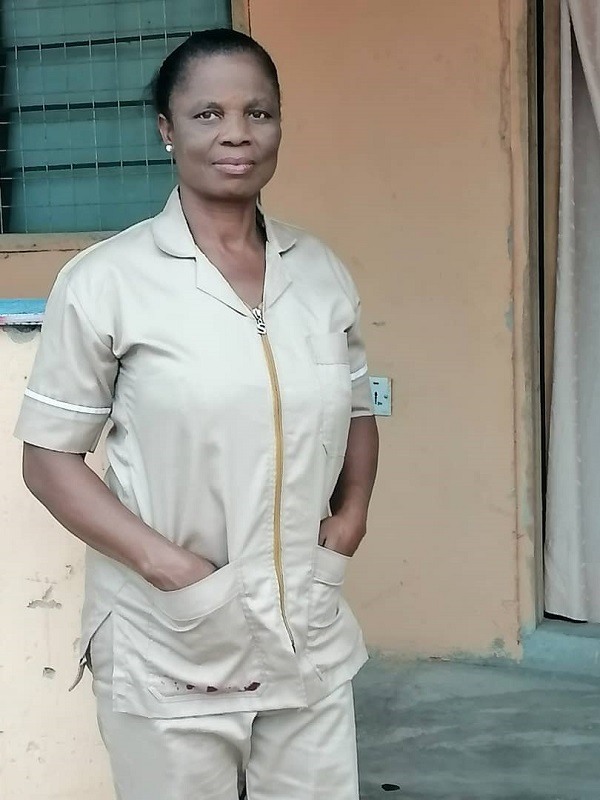 Super heroes or heroines do not always wear capes.

One such heroine is Ms Felicitas Naa.

Her amazing and inspiring story was told in The Mirror two years ago.

But the morals, values and her zeal to achieve her goal only gets better with time.

At 55, Ms Naa is happy she is an inspiration to her children

Ms Naa braved all odds, rose through every challenge to become the hygiene officer she had always wanted to be.

It took her 13 years of her adult life.

Childhood
Ms Naa was born in Nandom in the Upper West Region.

She had her basic and middle school education in Nandom and in 1984 at age 18, when she met the “love of her life” she felt she was walking on the moon.

Her “love” promised her the moon and pledged to help her continue her education after marriage.

So young, excited and naive, Ms Naa married at 18 but the love, affection and promises soon faded into thin air.

The situation worsened when her husband furthered his education.

She is now an environmental health assistant and supervises 31 labourers

Ms Naa said among the problems that erupted in her marriage was the fact that her educational background was too low.

“He would always complain about my low level of education,” she pointed out.

At a point, she was a bread seller and an adeɛyie (itinerant tailor) who went around with a sewing machine on her head trying to mend clothes to earn her daily bread.

Her marriage finally collapsed, leaving her in a state of absolute depression with no stable source of income and three children.

Decision time
Ms Naa said after some months of depression, it was time to rise and pick up the pieces.

“I had to pick myself up and start all over again. I was 40 years then. It was time for me to decide whether it was too late or whether I would start afresh. I chose the latter.”

Re-entry
So, in 2006 at age 41, Felicitas made a life-changing decision that would affect her life positively forever.

She decided to go back to her school to continue with her secondary education.

But there was a hitch.

After 22 years, the educational system had changed.

All senior high schools Felicitas tried to gain admission to would not admit her.

Now there was the Basic Education Certificate Examinations (BECE) that is used as basis for entry into senior high schools.

Ms Naa was “old school” and did not have the BECE certificate.

It meant that if she wanted to still go to school, she would have to start further down the ladder, from junior high school.

“I was determined to go back to school and so this was not a difficult decision for me to make.”

Together with her brother, who was a businessman in Cape Coast, they moved from one basic school to another till they found one ready to accept her.

She found the Pedu MA Basic School, whose head teacher, Mr Victor Zaator (now deceased), was ready to admit her.

Mr Zaator was Ms Naa’s mate during the middle school in the early 80s and he knew her zest when it came to academic work.

She now had to get ready for school.

“I had to cut my hair, sew my uniforms and get ready for school,” she said with a smile.

Determined, unperturbed and armed with a sense of possibility, she started junior high One in September 2006 at 41 years.

"By this time, my first daughter had completed senior high school,” she pointed out.

"People just looked at me from cars while others stared at me strangely every day I walked to school," she said. "I just didn't care. I knew what I wanted," she added.

Felicitas completed JHS in 2009
She then gained admission to the Oguaa Senior Technical School to do General Arts.

Ms Naa worked for sometime with the Cape Coast Metropolitan Assembly (CCMA) after senior high school before gaining admission to the Tamale School of Hygiene for a certificate programme.

Again, she braved all the challenges, worked hard and completed school.

The results
Finally, she has completed a certificate course in environmental health and has been posted to Prang in the Pru West District as an Environmental Health Assistant.

Ms Naa said she just loved to clean spaces and was happy that in her own small way she could help keep Ghana clean.

"Once this country is clean, most of our problems will be solved," she stated.

She says she now believes all things are achievable with God and determination.

“It’s a good decision I took. I am glad I took that decision to go back to school. It changed my life completely. I am an empowered person now.

"I have friends I couldn’t have had. I am not afraid to enter an office like before going back to school. I understand issues better. I can understand my children better and I even look younger now,” she said with a smile.

She thanked all who helped her through her difficult times.

Now 55, Ms Naa says she's happy she is an inspiration to her three adult children now aged 33, 30 and 24, respectively.

Ready to attain more
She said she was ready to pursue a diploma if she got support.

"I know education has no end and I am ready to pursue a diploma or even a degree, if I have support," she said.

For the youth, she said they should not be afraid to pursue their goals.

"Your life is not over until you are dead. Don't be intimidated by life and people. It’s never too late to chase your dream.”