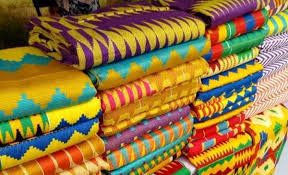 he Kente used to be known as a royal cloth because it was mostly found at traditional festivals where the most expensive ones would be worn by royals. Today, it is found at special events such as weddings, naming ceremonies and festivals.
30.5k Shares

IN early June this year when black members of the United States Congress gathered to honour the memory of Mr George Floyd who had been killed by police officers, they all wore strips of kente around their shoulders.

Explaining the use of Kente for that solemn moment, Representative Karen Bass of California said, “The significance of the kente cloth is our African heritage and for those of you without that heritage who are acting in solidarity… that is the significance of the kente cloth — our origins and respecting our past.” In that educational moment, Ghana’s royal cloth, Kente, transcended our shores and assumed an even greater purpose.

There is no dispute that Kente is associated with Ghana although variations of woven fabric can be found in almost every culture in Africa. However, this highly colourful, richly textured woven material known as Kente is a Ghanaian cultural product.

"KENTE" is a brilliantly colourful fabric, entirely hand-woven by Ghanaian weavers.
The brilliant colours and intricate designs associated with Kente have definitely made this fabric the best known of all Ghanaian, and perhaps even all West African textiles.

The Kente used to be known as a royal cloth because it was mostly found at traditional festivals where the most expensive ones would be worn by royals. Today, it is found at special events such as weddings, naming ceremonies and festivals.
While there is no dispute about the kente’s Ghanaian origin, the same cannot be said about its origins within Ghana. If you were to ask the average Ghanaian about Kente’s origins, the most likely answer would be Bonwire in the Ashanti Region.

Indeed, this what Wikipedia says about the town: Bonwire is a town in Ghana where the most popular cloth in Africa, popularly known as "Kente", originated.

The kente is worn by the king of the Ashanti Kingdom in Ghana. Bonwire is part of Ejisu-Juaben Municipal District within Ghana's Ashanti Region. The town is located about 18km on the Kumasi-Mampong road. The town has been celebrated in song and verse and a visit there leaves one in no doubt that it is the home of Kente in Ghana.

But, hold it there. Is that the whole story? Certainly not. When it comes to the origin of Kente in Ghana, Bonwire has competition. The town of Agotime Kpetoe lies some 180 kilometres north-east from Accra and 25 from Ho, the Volta Regional capital. It is the capital of the Adaklu-Anyigbe District and lies close to the border with Togo. On a normal day, the uninitiated visitor would be hard pressed to recognise it as the challenger to Bonwire as the origin of Kente in Ghana.

Of course, the fact that Agotime has kente heritage is well known. After all, it has established an annual kente festival which attracts thousands of people from the area and outside.

Known as Agbamevo Za, the festival is held in August every year and features speed weaving contests, kente dress design competitions and many other activities. It is a colourful event which features chiefs, queenmothers, traditional music, dance and other arts. This year, the pandemic prevented the celebration of the 25th anniversary of the festival which was instituted in 1995.

So Agotime Kpetoe’s credentials as a kente weaving area is well established. It is its claim as the origin of Kente that brings it into headlong competition with Asante Bonwire.

The two towns have contrasting narratives about how kente was introduced to their forebears. According to the Bonwire origin legend, two natives of the town known as Ota Karaban and Kwaku went hunting and while in the bush saw a spider weaving its web.

They imitated the actions of the spider using raffia from palm fronds. After making a successful prototype, they showed it to their chief, Nana Bobie who in turn passed the information on to the Asantehene.

The Asantehene reportedly liked the new cloth and adopted it as a national cloth for special occasions such as funerals, festivals, naming ceremonies and marriage ceremonies.

This story, which is a mixture of legend and history, places the origin of Kente at Bonwire. What will be the competing origin story of Agotime Kpetoe. For that, I traveled to the Volta Region town to meet Mr Gator Gbogbo, who is master kente weaver and his brother Mr Philip Gagba at Agotime Abenyinase, a small community outside Kpetoe. The two really know their Kente.

They showed pictures of their involvement in kente dating back to his youth and showed a profound understanding of kente as both an economic activity and a heritage item.

According to Mr Gagba, unlike the Bonwire legend, their ancestors came with the rudimentary technology of weaving from Egypt from where they migrated thousands of years ago.

He explained that the Old Testament story of Moses wrapped in woven cloth shows that their ancestors were weaving while in Egypt. “our ancestors were weavers from earliest times. They used to grow and use cotton for spinning before using the yarns to make kente. It goes back to antiquity”, he said.

According to Mr Gbogbo, Asante weavers learnt the craft from Agotime weavers who were captured and taken to Asante during the Ashanti Wars. He claimed further that the name Bonwire came about because that was where the Agotime weavers settled. He explained that the word “Bo” was another name for kente or woven cloth so “Bo nwene” in Akan which means “weavers of Bo” became corrupted to Bonwire.

Moving away from legends, Mr Gator explained that because of lack of investments in the Agotime kente, their brand has not grown as has been the case of Bonwire although he claims that their product is designed to be brighter and more colourful than the Asante version. Perhaps, realising that he was probably going to start a kente war, Mr Gbogbo conceded that today, Bonwire has the upper hand in terms of name recognition as the origin kente.

Indeed, it is likely that we have not heard the last word on the controversial origins of kente in this column. However, Ghana is richer for having more than one origin and centre of kente production.

It is obvious that with more investment in the Agotime Kente, poverty would be reduced and jobs created for the youth who are abandoning this noble craft for non-existing jobs in the cities.

Wherever we see the beautiful cloth from Ghana, we have to see it as part of our national heritage and a celebration of our artistic and cultural diversity.