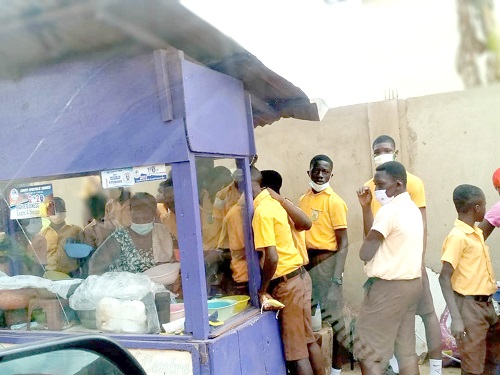 Some students were not observing social distancing. They were seen crowded at food vendor’s joint near the school.
30.5k Shares

Most schools in Accra have had their school compounds fumigated by the government.

This was revealed when the Junior Graphic visited schools to find out if they have had their premises fumigated.

The only challenge was with Personal Protective Equipment (PPE) which were yet to be received by some of the schools.

That notwithstanding, most of the schools have made available supplementary Veronica buckets, sanitiser and tissue papers as they wait on the government to supply the PPE.

The schoolchildren were seen washing their hands with the Veronica buckets provided and using the hand sanitiser; most of the students were also seen wearing the nose masks except for a few of them, who were spotted without their face marks.

At the Nima Cluster of Schools and Accra Newtown Experimental 2 Basic School, for instance, even though Veronica buckets have been placed at vantage points, most of the children were not wearing their face masks, neither were they observing social distancing as they were seen crowded round a food vendor near the school. Some children were also spotted playing with their face masks.

Most heads of schools assured the Junior Graphic that children were in safe hands because of the strict adherence to the safety protocols.

He also said the school had received a few supplies of the PPE from the Member of Parliament for Okaikwei Central, Mr Patrick Boamah.

“For my school, children are very safe because we follow all measures against COVID-19 strictly. We are running smoothly. We have enough thermometer guns and Veronica buckets.

Every morning, we deploy teachers to check the temperatures of children and ensure that the children observe the one metre social distancing while in their classrooms. A maximum of 25 pupils sit in a class”, he added.

The Headmaster of Little Saints School, Abeka- Tesano, Mr Tony Gag Gagblah, confirmed that the school had been fumigated entirely by the government. He also said the school had received PPE.

“The children are our main focus. We have ensured that all children adhere to the COVID-19 protocols on the school compound and also in the classrooms.

The only challenge is the rate at which the tissue papers get finished,” he noted.

The Head teacher of Meadow Preparatory School at Darkuman, Mr Kofi Richardson, who was very happy children had returned to school, said the school was fumigated on the Tuesday before re-opening of schools. He stressed that the school had not received any PPE.

“The Veronica buckets you see around were bought by the school. We have made enough preparations for the schoolchildren.

Fortunately, we have bigger classrooms so we have been able to ensure enough distancing among schoolchildren.

We also have extra classrooms where we can still space out children when the need arises,” he said.

For his part, the Parent-Teacher Association (PTA) Chairman, Mr Kofi Mensah, who was on the premises of St. Paul’s Basic School at Kpehe, told  the Junior Graphic that the school was managing the PPE given to them by the government when the form three students came to write their examination.

He said: “The school was fumigated before school resumed. Our school is safe for schoolchildren to learn.”

“We are still waiting for the government to supply more PPE,” he added.