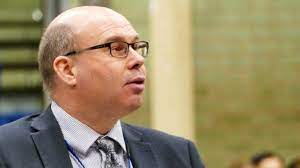 A music teacher credited with encouraging Ed Sheeran to pursue his dreams has been recognised in the New Year Honours list.

Richard Hanley, who taught the singer-songwriter at Thomas Mills High School in Framlingham, Suffolk, has been awarded the British Empire Medal (BEM).

He has been recognised for services to education.

Mr Hanley, who is the director of music at the school, said it was "very exciting" to be honoured.

"I think this award really is recognition for the school as well, because it's a school that's always valued the arts and placed high importance on them, and supported music and the arts throughout my 33 years there," he said.

He said his own music teacher inspired him to pursue the profession and he started at Thomas Mills in 1989.

"It's a wonderful place and there are lots of wonderful musicians and students there who I have taught over the years," said Mr Hanley.
He said he is "not sure how big a part" he played in Sheeran's career but added: "We always supported him in terms of opportunities to perform."

In his documentary, the pop star credits Mr Hanley with encouraging him to pursue his dream.

"There were a lot of teachers who didn't quite get it," he said. "Mr Hanley never had a doubt."

Sheeran, who lives in the area, recently made a surprise appearance at his old school to present prizes at its awards ceremony.

He also recently performed a pop-up gig in Ipswich and has been spotted in the county filming his new music video - and has previously filmed other videos in Suffolk, most notably Castle on the Hill, which features Framlingham's ruined medieval castle.