Frome: Children's rock duo are a hit with primary pupils 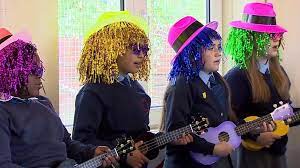 A Somerset children's rock duo have revealed how their interactive workshops help to make learning fun for primary pupils across the country.

They have spent the past 20 months touring schools with their award-winning workshops, heading to areas such as Bath, Kent and Shropshire.

They have worked with more than 45,000 students since launching their tour in March 2021.

'Positive benefits'
The pair were inspired to stage the workshops - which aim to educate and engage pupils through music - after seeing first-hand the diminishing importance schools place on the arts.

They focus on teamwork, bonding and exercise which in turn helps boost children's mental and physical wellbeing.

Mr Veck said: "Music should never be discounted. It's been proven to have positive benefits on a child's learning and development which is why we're touring with our music-led school workshops."
He said that the pair felt it was their "duty as teachers and parents to help build a child's confidence and self-esteem" through music.

They have written more than 650 songs and released two albums since forming in 2017.