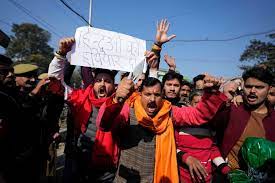 Two children have been killed and five other civilians wounded in a blast in a village in Indian-administered Kashmir, a day after assailants sprayed bullets towards a row of homes in the same area, leaving at least four dead, police said.

The blast occurred near one of the houses targeted overnight on Monday in Dhangri village in the southern Rajouri district.

A five-year-old boy and a 12-year-old girl died in the blast, officials said, adding that the injured were being treated at a hospital.

Police blamed armed attackers for carrying out the two attacks at Dhangri, which is close to the highly militarised Line of Control that divides the disputed Himalayan region between India and Pakistan.

It was unclear whether the explosive was left behind by the attackers that struck on Sunday night. Authorities rushed police and soldiers to the area and were searching for the attackers.

Dhangri is a Hindu-majority village and all the victims in the two incidents were Hindus.

Hundreds of people assembled in Dhangri to protest against the killings on Monday, chanting slogans denouncing the attackers.

They kept the bodies of the victims in a line in the main square and refused to cremate them while demanding that New Delhi’s top administrator in the region, Manoj Sinha, visit the village.

Nearly three dozen people in the southern city of Jammu also protested against the killings that Sinha condemned as a “cowardly terror attack”.

“I assure the people that those behind this despicable attack will not go unpunished,” he said.

Later, Sinha visited the village and met the families of the victims.