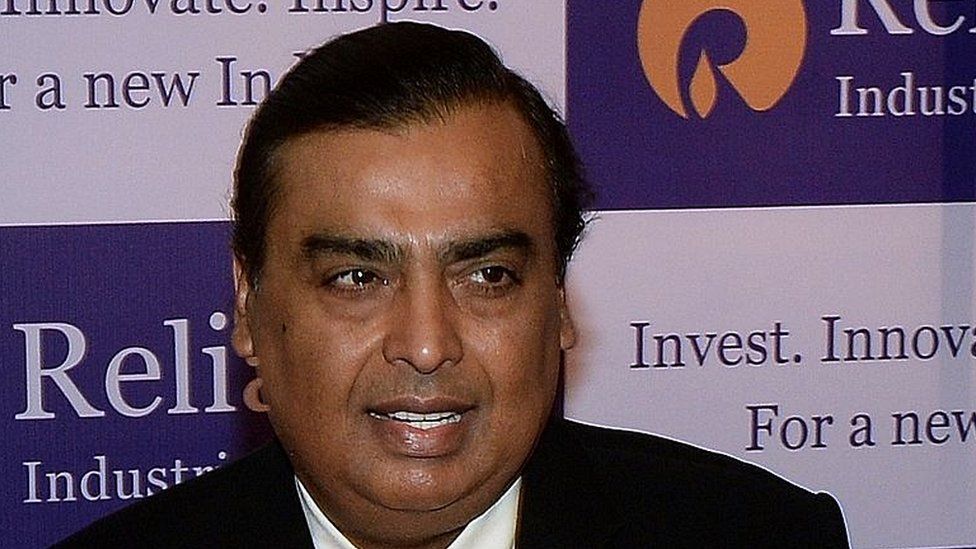 Mr Ambani, who heads the telecoms-to-retail group Reliance Industries, says the high-speed network will be introduced first in major cities, including New Delhi and Mumbai.

He said it will then be expanded to the rest of India by December 2023.

The company is also working with Google to develop a budget 5G smartphone.

Speaking on Monday at Reliance's annual general meeting, Mr Ambani said that once the firm's 5G network is fully operational it would be the biggest in the world.

The service will be rolled out through Reliance's subsidiary Jio - which is India's largest mobile carrier.

Mr Ambani also said that Reliance was working with US technology giant Google to develop an "ultra-affordable" 5G smartphone, without giving further details on its price or planned launch date.

The cheapest 5G-ready smartphones in India currently cost around $150.

Earlier this month, the Indian government concluded a record $19bn auction for airwaves, including 5G airwaves, where Jio emerged as the top buyer.

The fifth generation of high-speed mobile internet - or 5G - supports emerging technologies such as driverless cars and artificial intelligence.

It seen to be central to India's plans to transform the country into a $1tn digital economy.

In May, Prime Minister Narendra Modi said that 5G would "not only accelerate internet speed but also boost development and employment."

During the wide-ranging address to investors, Mr Ambani also laid out a succession plan for his business empire.

The 65-year-old confirmed that his daughter Isha would head Reliance's retail ventures, while his youngest son Anant would join its new energy business.

His eldest son Akash was appointed as the chairman of Jio in June this year.

It is now India's largest conglomerate by market value, with businesses including petrochemicals, oil and gas, telecoms and retail.

How Ambani is teaming up with Zuckerberg

Mukesh Ambani's $25bn pledge to launch 5G services, is aimed to further edge out competition not just in telecoms but also retail.

In a country of 1.4 billion people, there are nearly 500 million users of Meta's WhatsApp platform - a user base Mr Ambani is hoping to entice with his online retail offering.

India is also WhatsApp's largest market and Meta boss Mark Zuckerberg, has been looking to push its WhatsApp business platform - which allows commerce on the messaging platform - for over a year now.

With this collaboration, Reliance will be able to extend its reach in the online retail sector. And for Meta, partnering with a leading player like Reliance and making its services available to all users on WhatsApp, gives it a stronger hold in India.

India is home to a nearly $700bn retail market and we have seen big businesses jostling to dominate that space.

Reliance Retail operates India's fastest growing and most profitable retail business, with over 12,000 stores across the country.

And with their combined might they hope to take on and beat online retail giants like Amazon and Walmart-owned Flipkart.