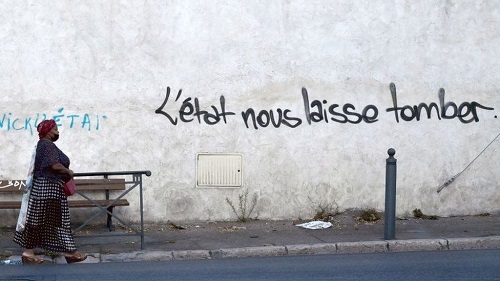 Two weeks ago a 14-year-old boy called Rayanne was shot dead by a young man on a scooter outside the Les Marronniers housing estate where he lived in northern Marseille.

Two other boys - one of 14, the other aged eight - were wounded in the attack.

Over the following weekend three more people were murdered in Marseille, also in turf wars over drugs.

One of them was burned alive in the boot of a car. So far this year there have been 15 gangland killings in France's second city, 12 since the start of the summer.

It's not the mere numbers that are shocking.

On that count, this year looks no worse than previous ones. Last year there were 28 deaths; in 2018 there were 23.

In France headlines about score-settling - règlements de comptes - in the Cité Phocéenne (journalese for Marseille) are as regular as the seasons.

'Start of a trend'

What has people talking - and fretting - is the young age of so many of the victims.

Rayanne is a case in point. Relatives insist he was a normal schoolboy caught in the crossfire.

Investigators think otherwise: that he was a chouffeur (look-out) paid by one of the gangs to patrol the frontline of its demesne.

Police, magistrates, social workers and local journalists all agree that the age of these drugs auxiliaries has been getting steadily younger.

With the benefit of hindsight we can see it was the start of a trend," one social-worker told Le Monde newspaper last week.

According to the writer and expert on Marseille's poor northern neighbourhoods, Philippe Pujol: "The killings in Marseille are always over sales-points.

The big bosses slug it out in Morocco or Spain. Here on the ground the drugs retail has been subcontracted out, and it's teenagers doing the work."

Youngsters can be recruited over the Internet and many come from estates in other French cities.

"It's like a summer job, but they're much more vulnerable than the local lads because they're so isolated," an investigating magistrate told Le Monde newspaper.

According to Pujol, many young recruits become indebted to the gang leaders. Some start taking drugs themselves. With police raids getting more frequent, good new sales-points are hard to find.

"Young and in debt, they want to make big sales, so they push out further from their home turf. And that's where the competition comes.

They come up against other kids from other gangs, also playing high stakes," he says.

The gangland violence forms the backdrop for President Emmanuel Macron's three-day visit to Marseille, which starts on Wednesday.

There will be announcements on extra police and magistrates, but also on housing, transport and education - a recognition that drugs is only one part of the problem. Poverty and urban squalor is the other.

Seven months ahead of the presidential election, it's a chance for President Macron to take the initiative on the questions of law and order which look likely to dominate the race.

What he wants to avoid is letting the hard-right's Marine Le Pen or a centre-right candidate like Xavier Bertrand treat the issue as their own.

But are Marseille's problems worse than those of other French cities, like Paris or Toulouse?

Some, like the city's new police commissioner Frédérique Camilleri, say yes. "The level of violence here, intra-gang or inter-gang, is on a different level," she says.
"Here it's the rule of violence, with forced labour, intimidation, blackmail, even torture. It's very organised and very hierarchical. The youngsters who become involved don't know what they're getting into."
'Magnifying mirror for France'

Marseille has, of course, a particular history, geography and character, all of which set it apart from the rest of France.

For more than 2,500 years it's been home to immigrants from across the Mediterranean. Banditry and underworld crime have always thrived; unlike elsewhere, its problem estates are not on the outskirts but in the heart of the city.

But, seen in another light, Marseille is not so different. "Marseille concentrates in one place all the problems of urban France," says Pujol.

For one of Macron's advisers, Marseille is like a "magnifying mirror for the country as a whole".

In other words drugs gangs, turf wars, even the murder of teenage look-outs are not unique to the Cité Phocéenne. But they are more common.