Eid-ul-Adha, the festival of sacrifice 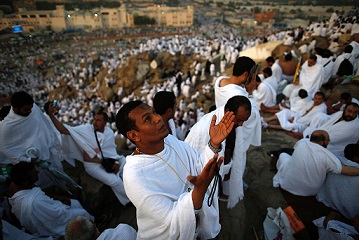 The Hajj pilgrimage is a demonstration of the solidarity of the Muslim people and their submission to their God, Allah. Follow @Graphicgh

Muslims around the world celebrated Eid ul-Adha over the weekend.

The annual celebration often called “the big Eid”, is considered as an important religious event compared to Eid ul-Fitr, which comes after Ramadan.

The celebration marks the end of the Hajj or the Islamic pilgrimage to Mecca, which is one of the five pillars of Islam, obligatory for those who are financially and physically able to complete it once in their lifetime. The occasion has rich symbolism for Muslims and many traditions.

Eid-ul-Adha is celebrated on the third day of hajj and it lasts for three days to honour the willingness of Ibrahim (Abraham) to sacrifice his son Ismail (Ishmael) as an act of obedience to Allah’s command.

Before Ibrahim could sacrifice his son, however, God provided him with a lamb which he was supposed to kill in his son’s place because of his willingness to sacrifice his own son in the name of God.

In commemoration of this intervention, animals are ritually slaughtered and divided into three, one-third of their meat is consumed by the family while the rest of the meat is distributed to the poor and needy. Sweets and gifts are given, and visits are paid to the extended family members.

The Hajj pilgrimage is a demonstration of the solidarity of the Muslim people and their submission to their God, Allah.

Each year, some two million Muslims from around the world journey to Mecca to make the five-day pilgrimage. This year, Ghana’s annual quota of 6,000 was reduced to 3,069 due to the COVID-19 restrictions.

The last batch of Ghanaian pilgrims left Accra for Saudi Arabia on Sunday, June 3, to start the spiritual journey which began on Thursday, July 7.

Depending on the country, the celebrations of Eid-ul-Adha can last anywhere between two and four days, and the act of sacrifice known as the Qurbani is carried out following the Eid Prayers, which are performed at the nearest mosque on the morning of Eid.

The act of Qurbani consists of slaughtering an animal as a sacrifice to mark this occasion in remembrance of Prophet Ibrahim’s sacrifice for Allah. The sacrificial animal must be a sheep, lamb, cow, bull or camel.

The sheep or lamb consist of one Qurbani share, whereas a bull, cow or camel consists of seven shares per animal. The animal must be in good health and over a certain age in order to be slaughtered in a friendly manner and in an Islamic way.