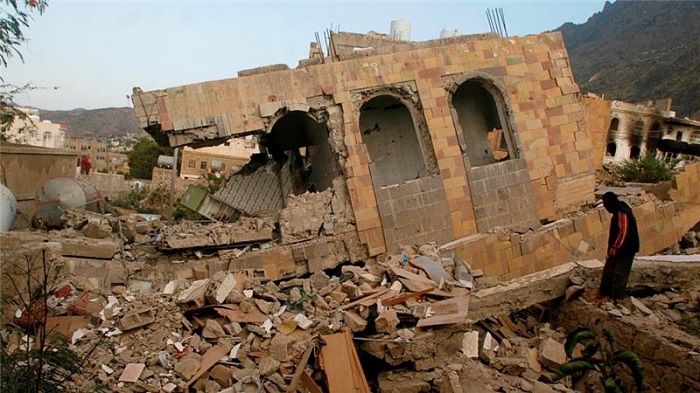 Thousands of people have been killed in the conflict, according to the UN [Anees Mahyoub/Reuters]
30.5k Shares

Saudi Arabia has denied that the Arab coalition it spearheads violated a 48-hour ceasefire by launching air strikes against the Houthi rebels in the Yemeni capital of Sanaa.

Major General Ahmed Asseri, the coalition spokesman, told Al Jazeera on Sunday from Riyadh the air raids were a response to violations by the Houthi rebels who control most of Yemen.

"We told them that if they move their troops on the ground, if they try to gain position, there will be a response. This is what we are doing," Asseri said.

"There are people on the ground we have to protect. We have the Yemeni national army, we have the population in the area."

He said the Houthi rebels "keep firing on civilian positions" in the city of Taiz.

Asseri accused the Houthis of 180 violations in the first 10 hours of the ceasefire.

He said 150 breaches took place in Yemen, while 30 others were along the northern border with Saudi Arabia.

The truce that came into force on Saturday followed US Secretary of State John Kerry's push to halt a conflict that has wrought devastation on the Arab world's poorest country and killed thousands.

Kerry met rebel representatives in Oman and urged the internationally recognised government of President Abd-Rabbu Mansour Hadi to come on board for the ceasefire and political negotiations.

At first, Hadi's government rejected the peace bid, saying it had not been consulted, while the Houthis and their ally former President Ali Abdullah Saleh declared their commitment to it.

But the government came under huge pressure to back down in the face of an international outcry over the mounting civilian death toll.

The conflict erupted in 2014, when the Iran-backed Houthi rebels, and their allies of renegade troops loyal to Saleh, overran Sanaa and other parts of Yemen.

It escalated in March 2015, when Saudi Arabia - the arch foe of Iran - launched a military campaign to drive back the rebels. The United Nations says more than 10,000 people have been killed and nearly 37,000 wounded since then.