Zimbabwe 'must vote by 31 July' 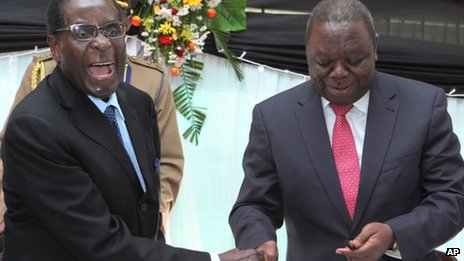 Zimbabwe's highest court has ruled that presidential and parliamentary elections must be held by 31 July.

The Constitutional Court said President Robert Mugabe should set a date "as soon as possible".

Mr Mugabe, of the Zanu-PF party, is likely to face MDC leader Morgan Tsvangirai in the presidential poll.

Mr Tsvangirai has been serving as Mr Mugabe's prime minister in a fractious coalition government since disputed elections in 2008.

Last week, a new constitution, backed by the main parties and approved in a referendum in March, was signed into law.

The Movement for Democratic Change (MDC) had called for the elections to be held later this year, so that changes in the new constitution could be implemented.

Mr Mugabe, who has been in power since 1980, had argued for an early vote.

The coalition government has helped end the hyperinflation that saw Zimbabwe's economy collapse.

But the administration has been fraught with squabbles over introducing reforms.

Five years ago, Mr Tsvangirai won the most votes in the first round of the presidential election but, according to official results, not enough to win outright.

He pulled out of the second round, saying his supporters were being targeted in a campaign of violence.

After Mr Mugabe went ahead with the election, winning with 85% of votes cast, regional mediators intervened to organise a power-sharing agreement.