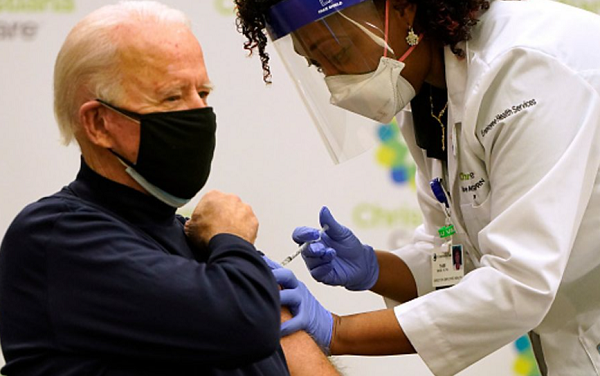 President-elect Joe Biden has received his first dose of the Pfizer Covid-19 vaccine, saying he was getting the jab to show Americans it is "safe to take".

On Sunday, the roll-out began for a second vaccine, by Moderna, which was approved last week.

More than 500,000 Americans are said to have now been vaccinated.

“I’m doing this to demonstrate that people should be prepared, when it’s available, to take the vaccine. There’s nothing to worry about. I’m looking forward to the second shot.” https://t.co/Wl0trd3fss pic.twitter.com/ZaJzfunUSu

"I'm doing this to demonstrate that people should be prepared when it's available to take the vaccine," Mr Biden said from Newark, Delaware, where he got the jab live on TV. "There's nothing to worry about."

He said the Trump administration "deserves some credit" for launching the country's vaccine programme.

The Biden team has set a goal of 100 million Covid-19 vaccinations in the US during the administration's first 100 days in the White House.

During the pandemic, the US has recorded more than 18 million cases and 319,000 deaths.

President Donald Trump, who spent three days in hospital with the coronavirus in October, has not said when he intends to get the vaccine.

The president is now one of last of the country's top elected officials to have not received the first of the course of two jabs.

"I am not scheduled to take the vaccine, but look forward to doing so at the appropriate time," Mr Trump wrote in a 13 December tweet.

Some of his advisers have defended the delay, saying he is still protected by the treatments he received to beat the virus.

Who gets the vaccine first?

The US Centers for Disease Control and Prevention (CDC) on Sunday released a new set of guidelines for the next groups of Americans to be eligible for vaccination.

Phase 1A: US vaccine distribution has so far 21 million healthcare workers, as well as the three million elderly Americans living in long-term care facilities. Vaccinations for this group began last week.

Phase 1B: Americans aged 75 and older, in addition to frontline workers will be next up. This broad category includes some 30 million workers "who are in sectors essential to the functioning of society" with high risk of exposure. First responders, corrections workers, US Postal Service employees, and those who work in education, public transit, grocery stores, manufacturing, food and agriculture will be eligible. This phase is expected to begin in January.

Phase 1C: Americans aged 65 and older, those with underlying medical conditions that increase their risk of severe illness from Covid-19, and other essential non-frontline workers. This category includes an estimated 129 million people.

How has the rollout been so far?

Roughly three million doses of the Pfizer vaccine have been shipped and more than 500,000 Americans have been vaccinated so far, according to the CDC. And on Sunday, distribution of the Moderna vaccine began in the country too, with some six million vaccine doses available for immediate shipment.

The army general in charge of distributing Covid vaccines in the US on Saturday apologised for a "miscommunication" with certain states over the number of doses to be delivered in the initial stages of distribution. More than a dozen states had expressed concern at a cut in the expected number.

On Friday, more than 100 doctors at Stanford Medical Center protested against the university's plan for vaccine distribution. They say only seven of more than 1,300 residents - recent graduates of medical school - were selected to receive the vaccine in the first round of 5,000 doses. Hospital administrators and doctors working from home were given priority over those working directly with Covid-19 patients, according to the protesters.

Stanford officials later apologised, saying the university was working "to address the flaws in our plan".