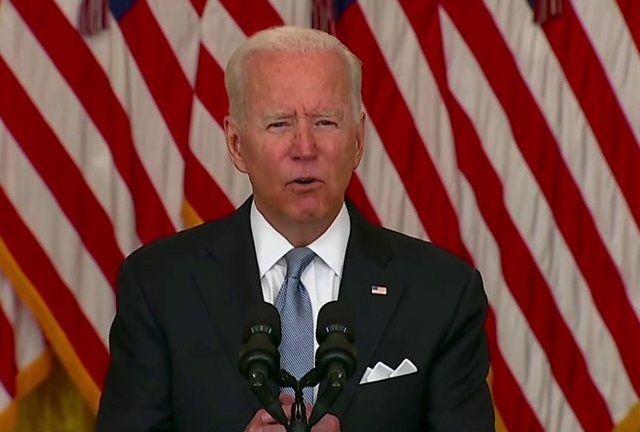 President Joe Biden has said he stands "squarely" behind the US exit from Afghanistan as he faces withering criticism over the Taliban's lightning conquest of the war-torn country.

"How many more American lives is it worth?" asked the Democratic president.

He said that despite the "messy" pull-out, "there was never a good time to withdraw US forces".

On Sunday, the Taliban declared victory after Afghan President Ashraf Ghani fled and his government collapsed.

The militants' return to rule brings an end to almost 20 years of a US-led coalition's presence in the country.

Kabul was the last major city in Afghanistan to fall to a Taliban offensive that began months ago but accelerated in recent days as they gained control of territories, shocking many observers.

Mr Biden's address followed a dramatic day at Kabul's international airport, where hundreds of civilians desperate to flee the country forced their way inside on Monday.

Many thronged the runway, running alongside a moving military transporter aircraft as it prepared for take-off.

Some clung to the side of a plane, and at least two of them are reported to have perished when they fell from the aircraft after it had left the ground.

American troops killed two armed Afghans who were part of the crowd that breached the airport perimeter. Seven people reportedly died in total.

The US suspended its evacuation from Kabul but it has now resumed.

A remarkable picture from Sunday appears to show 640 Afghans packed onboard a US military cargo plane leaving Kabul for Qatar.

The image, not verified by the BBC, was obtained by the US defence analysis website, Defense One.

Panicked civilians had scrambled up the loading ramp, the website quoted US officials as saying, but the crew decided it was best to take off rather than force the Afghans off.

In a separate development, the Taliban have announced what they are calling a general amnesty for government officials, and have urged them to return to work.

A statement said officials should "continue their duties without any fear".

'The right decision'
Mr Biden returned on Monday to the White House from the Camp David presidential retreat to make his first public remarks on Afghanistan in nearly a week.

"If anything, the developments of the past week reinforce that ending US military involvement in Afghanistan now was the right decision," said Mr Biden.

"American troops cannot and should not be fighting in a war and dying in a war that Afghan forces are not willing to fight for themselves."

Mr Biden is facing an intense political backlash over the turmoil in Kabul following his April decision to order all American troops out of Afghanistan by 11 September - the 20 year anniversary of the terror attacks that triggered the US invasion.

Mitch McConnell, Republican Senate Minority Leader, tweeted: "What we are seeing in Afghanistan is an unmitigated disaster. The Biden Administration's retreat will leave a stain on the reputation of the United States."

Former US President George W Bush, who authorised the military intervention in 2001, said he was "watching the tragic events unfolding in Afghanistan with deep sadness".

"The Afghans now at greatest risk are the same ones who have been on the forefront of progress inside their nation," Mr Bush said, stressing that the US had "the legal authority to cut the red tape for refugees during urgent humanitarian crises".

In his speech, Mr Biden said the US mission in Afghanistan was never supposed to have been about nation-building.

He said that when he was vice-president he had opposed the 2009 deployment of thousands more troops into the country by former President Barack Obama.

Mr Biden also noted he had inherited a deal negotiated with the Taliban under former President Donald Trump for the US to withdraw from Afghanistan by May of this year.

He said he was now the fourth US president to preside over America's longest war, and would not pass the responsibility on to a fifth.

"I will not mislead the American people by claiming that just a little more time in Afghanistan will make all the difference."

Mr Biden campaigned as a seasoned expert in foreign policy and declared after assuming office this year that "America is back".

Last month he assured reporters it was "highly unlikely" the Taliban would overrun the entire country.

But he conceded on Monday that "this did unfold more quickly than we had anticipated".

On Tuesday Mr Biden's assessment was echoed by the chief of the Nato alliance, which had a leading role in combat operations and training government security forces in Afghanistan.

Nato Secretary General Jens Stoltenberg said while Nato forces "never intended to stay in Afghanistan forever," the speed at which the Taliban took control surprised them.

Mr Stoltenberg described this rapid takeover as a "failure of Afghan political leadership", but said Nato also had lessons to learn.

Opinion polls suggest most Americans support the US exiting Afghanistan.

But Mr Biden is facing a barrage of criticism over the manner of the departure, after he withdrew US troops then sent thousands back in to help the evacuation.

Images emerged on Sunday showing US helicopters circling the US embassy in Kabul.

For many, the pictures evoked America's humiliating departure from Saigon, Vietnam, in 1975 when Mr Biden was a junior senator.