The world should not dictate to Africa - Antony Blinken 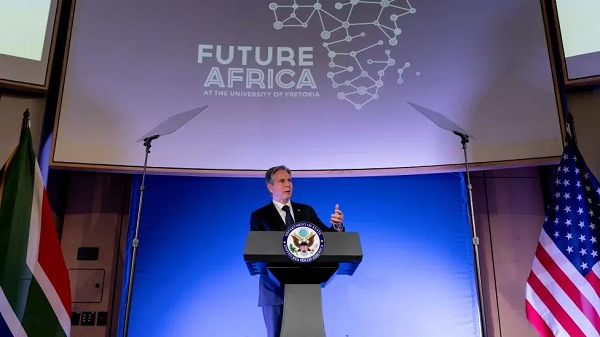 The world should not dictate to Africa - Antony Blinken
30.5k Shares

The US secretary of state has said Washington will "not dictate" which choices Africa should make and "neither should anyone else".

"African nations have been treated as instruments of other nations' progress, rather than the authors of their own," Antony Blinken said.

He is currently in South Africa as part of a three-nation African tour.

Washington is seeking to boost relations amid growing concern over the growing influence of Russia and China.

Mr Blinken addressed African reservations that the continent is sometimes used as a pawn in international relations: "Time and again, they have been told to pick a side in great power contests that feel far removed from daily struggles of their people."

He outlined the US's priorities for the continent, which include democracy, investment, security, Covid recovery support and clean energy.

The continent has big upcoming elections, including in Kenya and Nigeria. Mr Blinken said Washington will not treat democracy as "an area where Africa has problems and the United States has solutions" but will recognise the "common challenges" to "tackle together, as equals".

He also addressed the controversial Russian mercenary group, Wagner, which has been operating in some African countries like Libya and as some reports say, in Mali and the Central Africa Republic also.

He accused the "Kremlin-backed" group of exploiting "instability to pillage resources and commit abuses with impunity".

The Russian government denies any links with the shadowy private military company.

Mr Blinken said the US will launch a Global Fragility Act which "will make a decade-long investment in promoting more peaceful, more inclusive, more resilient societies in places where conditions are ripe for conflict".

Earlier Mr Blinken and his South African counterpart, Naledi Pandor, stressed the historic ties between their two countries, and highlighted the importance of their cooperation in areas such as trade and investment, health and science.

The Ukraine war was also a point on contention between the two.

Ms Pandor said she and Mr Blinken had had "very frank discussions where at times we don't agree - but it has not broken this friendship", she said. "In fact it has made it stronger."

While she confirmed that the US had not tried to tell South Africa what to do when it comes to its relationships with other global powers, Ms Pandor said that "in terms of partners in Europe and elsewhere there has been a sense of patronising and bullying".

She also once more criticised a draft bill going through the US congress which she says could penalise African countries for not towing the line on the Ukraine conflict - calling the Countering Malign Russian Activities in Africa Act "offensive legislation".

Relations between South Africa and the US have been strained after South Africa remained neutral over Russia's invasion of Ukraine, refusing to join Western calls to condemn Moscow.

Nearly half of the abstentions for a UN general assembly resolution in March condemning Russian "aggression" and demanding its withdrawal from Ukraine were from African countries.

In his speech, Mr Blinken also appeared to address Moscow's argument that Western sanctions are to blame for rising grain prices, which is affecting Africa: "Even before President Putin launched his full invasion, 193 million people around the world were in need of humanitarian food assistance," he said.

Mr Blinken also suggested the US is supporting African countries affected by the war, whereas Russia is causing problems.

"The World Bank believes Russia's invasion could add another 40 million people to this unprecedented number. Most are in Africa," he continued.

Of late, American influence in the region has been side-lined at the hands of Russian and Chinese influence.

China has been investing in Africa for decades and plays a significant role in the region. In January it appointed a special envoy to Horn of Africa to tackle insecurity, saying Beijing "will continue to play even a bigger role for peace and stability in the region".

Meanwhile France's President Macron visited Cameroon, Benin and Guinea-Bissau around the same time, where he also rebutted Mr Lavrov's assertion that the West is to blame for rising food prices.

Mr Blinken will also visit Rwanda and the Democratic Republic of Congo.

Washington will host a US-Africa leaders summit in December to foster new economic engagement with the continent.