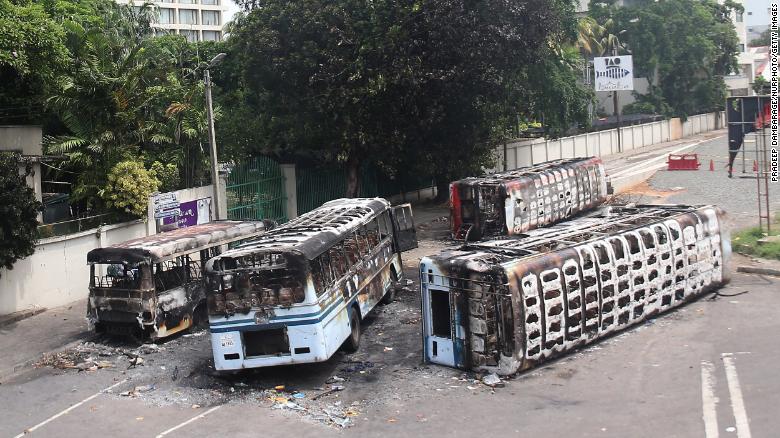 Burned buses near the official residence of Sri Lanka's outgoing Prime Minister, Mahinda Rajapaksa, in Colombo, a day after they were torched by protesters on May 10. Follow @Graphicgh

Protesters in Sri Lanka have burned down homes belonging to 38 politicians as the crisis-hit country plunged further into chaos, with the government ordering troops to "shoot on sight."

Police in the island nation said Tuesday that in addition to the destroyed homes, 75 others have been damaged as angry Sri Lankans continue to defy a nationwide curfew to protest against what they say is the government's mishandling of the country's worst economic crisis since 1948.

The Ministry of Defense on Tuesday ordered troops to shoot anyone found damaging state property or assaulting officials, after violence left at least nine people dead since Monday; it is unclear if all of the deaths were directly related to the protests. More than 200 people have been injured.

The nation of 22 million is grappling with a devastating economic crisis, with prices of everyday goods soaring, and there have been widespread electricity shortages for weeks. Since March, thousands of anti-government protesters have taken to the streets, demanding that the government resign.

The military had to rescue the country's outgoing Prime Minister Mahinda Rajapaksa in a pre-dawn operation on Tuesday, hours after he resigned following clashes between pro- and anti-government protesters. The military were called after protesters twice tried to breach the Prime Minister's Temple Trees private residence compound overnight, a senior security source told CNN.

Rajapaksa's resignation came after live television footage on Monday showed government supporters, armed with sticks, beating protesters at several locations across the capital, and tearing down and burning their tents. Dozens of homes were torched across the country amid the violence, according to witnesses CNN spoke to.

Armed troops were deployed to disperse the protesters, according to CNN's team on the ground, while video footage showed police firing tear gas and water cannons.

However, it remains unclear if the curfew and the Prime Minister's resignation will be enough to keep a lid on the increasingly volatile situation in the country.

Many protesters say their ultimate aim is to force President Gotabaya Rajapaksa -- the Prime Minister's brother -- to step down, something he has so far shown no sign of doing.

The President on Tuesday urged citizens to "remain calm and stop the violence and acts of revenge against citizens, irrespective of political affiliations."

"All efforts will be made to restore political stability through consensus, within the constitutional mandate and to resolve economic crisis," the President tweeted.

In a statement Tuesday, the European Union and its 27 Member States condemned the "recent vicious attack against peaceful protesters" and called on authorities to investigate.

"The EU deplores the loss of life, including of a Member of Parliament, and the high number of injured people," the statement said. "The EU recalls the importance to safeguard the democratic rights of all citizens, and to focus on solutions that will address the significant challenges currently faced by the Sri Lankans."

"As a close neighbor of Sri Lanka, with historical ties, India is fully supportive of its democracy, stability and economic recovery," a spokesperson from the Ministry of External Affairs said Tuesday.