Shooting at US Mothers' Day parade 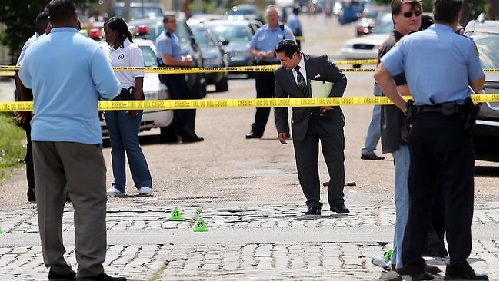 Nineteen people have been wounded in a shooting at a Mother's Day parade in the US city of New Orleans, police say.

The victims included two children who were grazed by bullets. Police say most injuries are not life-threatening.

It is unclear what sparked the shooting in the city's 7th Ward on Sunday afternoon. Police say three suspects were seen fleeing the area.

The incident happened at about 14:00 (19:00 GMT) at the intersection of Frenchmen and Villere streets.

"Shots were fired with different guns," a police statement said.

"Immediately after the shooting our officers saw three suspects running from the scene."

FBI spokeswoman Mary Beth Romig said they had "no reason to believe it was an act of terror, just street violence".

The shooting happened at what is known as a second-line parade - an impromptu community procession in which people dance down the street behind the official parade.

About 200 people were in the area at the time.

Local resident Gretchen Ramke, 30, said she heard "six or seven" shots ring out about 30ft (9m) from where she stood with a friend.

"Somebody in the crowd yelled 'everybody get down', so we did. We just hit the deck. We saw a lot of people diving to the ground," she told the BBC.

"We waited about 40 seconds and the firing had stopped. We thought: we've got to get out of here."

She said she saw one man with a shot wound to his arm being helped by another man, who used his belt and a t-shirt to dress the wound.

"We saw the man who had been shot a few minutes later calmly walking past us with the belt around his arm," she said.

New Orleans Mayor Mitch Landrieu called it a "tragic day" and appealed for an end to what he called the "relentless drumbeat of violence" on the city's streets.

The BBC's Jane Little in Washington says New Orleans has a high rate of gun crime.

The area where the shooting happened is a poor neighbourhood that is still recovering from the devastation left by Hurricane Katrina in 2005, she adds.