Lives & livelihood and Govt of Guinea tackle sanitation in Conakry 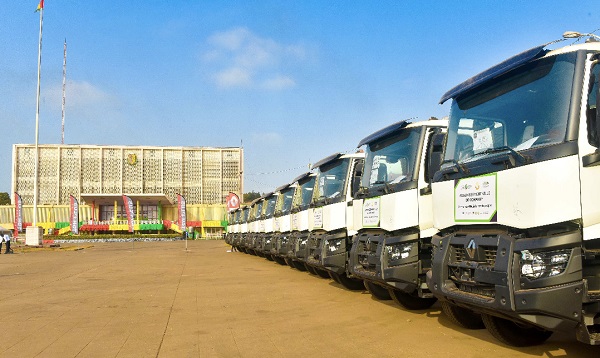 The Lives & Livelihoods Fund (LLF), a multilateral development initiative created by the  Islamic Development Bank (IsDB) with support from several development cooperation partners, and the government of Guinea today delivered 56 sanitation trucks to the National Agency for Public Hygiene and Sanitation (ANASP), an agency under Guinea’s Ministry of Hydraulics and Sanitation, to address challenges linked to urgent solid waste disposal in key areas of Conakry, the capital city of Guinea.

The fleet of trucks were handed over today in a ceremony held under the patronage of His Excellency Professor Alpha Condé, the President of the Republic of Guinea, at the ‘Palais du Peuple’ in Conakry. The event was also attended by the regional representative of the IsDB, Dr Alpha Diallo, and several high-ranking officials.

The project aims to improve safety, environmental and social conditions in Conakry by providing better access to a sustainable waste collection system, as well as protecting the environment through improved waste treatment at the public garbage dump.

According to UN-Habitat, lack of sanitation has led to more than 1,200 daily deaths of children under five worldwide, more than the number of deaths caused by AIDS, measles and tuberculosis combined. Through the Conakry Sanitation Project, 1.7 million inhabitants of Guinea’s capital will be protected from flooding and benefit from regular collection of solid waste. Sludge treatment will increase from zero in 2017 to 500 cubic metres per day in 2022, while the number of cases of malaria, diarrhoea, schistosomiasis, and typhoid are predicted to drop by half in children under 5 years old. The project is also creating hundreds of direct and indirect jobs.

Professor Alpha Condé, President of the Republic of Guinea, stated: “Populations living in a healthy environment and who are themselves healthy are citizens capable of investing themselves fully and with all their might, in the process of resilience to shocks and socio-economic development underway in Guinea as part of the emergence hoped for in 2040.”

Dr Bandar Hajjar, President of the IsDB, commented on the occasion by saying: “Access to safe and effective waste disposal is one such necessity that every person should have, which is why we are proud to be working with the Government of Guinea in its efforts to protect and empower its people, and helping the city of Conakry to tackle this challenge and fundamentally improving the lives of its citizens.”

“The ambition of the Lives & Livelihoods Fund and its donor partners is to enable countries to invest in the key services and infrastructure that will ensure a safer, healthier and more prosperous future for their people,” Dr Hajjar added.

The Lives & Livelihoods Fund uses an innovative financing model that combines grants of the regional and international donors with the lending capital of IsDB to offer concessional loans. The loans do not merely address immediate needs but rather set in motion fundamental change that can create opportunities for millions of disadvantaged people.

By blending grants with affordable loans, the LLF also unlocks capital for those that would not normally be able to access a higher level of financing. The fund currently supports 28 projects across Africa and Asia, including in Morocco, Niger, Nigeria, Cameroon, Mauritania, Uganda, Pakistan, and Indonesia.
Mrs Kanny Diallo, Minister of Planning and Economic Development of the Republic of Guinea, Country Governor for the IsDB, “With the support of our technical and financial partners, the Government has invested significantly in the purchase of equipment and logistics to improve hygiene and sanitation in the capital. We urge the beneficiary populations to ensure maintenance of the equipment and we urge those in charge, at all levels, to manage these facilities efficiently in order to restore Conakry's image as the pearl of West Africa.”

About The Lives and Livelihoods Fund

About The Abu Dhabi Fund for Development (ADFD)

The Abu Dhabi Fund for Development is a foreign aid agency established by the government of Abu Dhabi in 1971. The fund provides concessionary loans to fund economic and social development projects. The fund also invests in order to expand and strengthen the private sector economies of its clients.

About The Bill and Melinda Gates Foundation (BMGF)

Guided by the belief that every life has equal value, the Bill & Melinda Gates Foundation works to help all people lead healthy, productive lives. In developing countries, it focuses on improving people’s health and giving them the chance to lift themselves out of hunger and extreme poverty. In the United States, it seeks to ensure that all people—especially those with the fewest resources—have access to the opportunities they need to succeed in school and life. Based in Seattle, Washington, the foundation is led by CEO Mark Suzman, under the direction of Bill and Melinda Gates and Warren Buffett.

FCDO pursues national interests and projects the UK as a force for good in the world. FCDO promotes the interests of the commonwealth, safeguard the UK’s security, defend the UK's values, reduce poverty and tackle global challenges with our international partners.

About Qatar Fund for Development (QFFD)

QFFD is a public development institution committed, on behalf of the State of Qatar, to implement external aid projects under Law No. 19 of 2002 and its amendments. It has provided aid to several countries around the world to achieve the international cooperation goals of the Qatar National Vision 2030. The Qatar Fund for Development's main goal is to achieve inclusive and sustainable development, by addressing priority issues of education, health and economic empowerment.