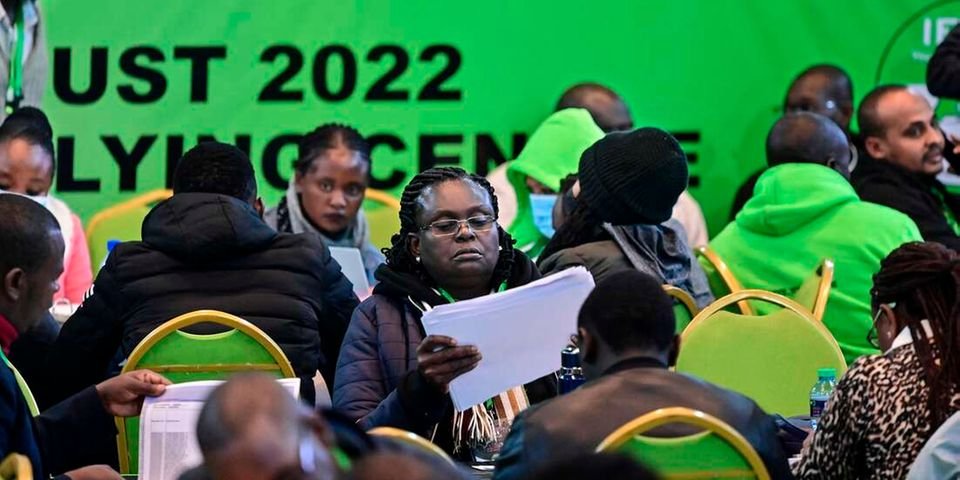 Independent Electoral and Boundaries Commission clerks work to verify presidential results of the just concluded general election in the national tallying centre at 'The Bomas of Kenya' in Nairobi on August 13, 2022. Tony Karumba | AFP
30.5k Shares

The electoral commission has made adjustments to the presidential results verification process at the national tallying centre in Bomas of Kenya as it races against time to meet the Tuesday deadline.

Independent Electoral and Boundaries Commission (IEBC) Chairperson Wafula Chebukati has said they have reversed the process to speed up verification of results from returning officers.

Mr Chebukati said processing one Returning Officer was taking between three and four hours. Only 141 returning officers out of the 265 have been processed, leaving 124 waiting.

“Due to the slow process, some of our returning officers have stayed here for three days which is unacceptable,” he added.

He ordered all the returning officers, who are yet to be processed, to hand over their forms to him as the national tallying officer.

The RO’s will then go to the IEBC ICT desk for verification of the transmitted results in forms 34A against the original forms 34A.

Presidential agents will then be given copies of results forms 34A and 34B and original documents for verification.

The new verification flow, said the IEBC boss, will guarantee faster processing of the results and allow the commission to meet constitutional timeliness for processing of presidential results.

“We are reversing the flow of the ongoing process and we believe that this will fasten the process,” he said.

Further to the new directives, Commissioner Abdi Guliye that going forward, only presidential agents, their legal assistants, chief agents and their deputies, clerks doing the verification process, media, diplomats and observers will be allowed inside the auditorium.

“Nobody else will be allowed to sit in this auditorium from this minute on,” said Prof Guliye.