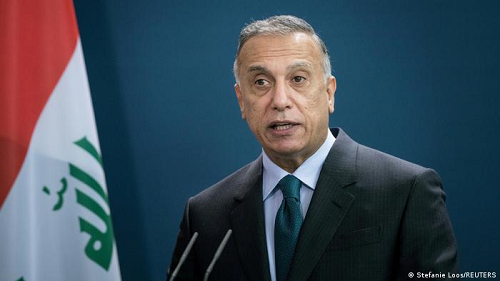 The residence of Iraqi Prime Minister Mustafa al-Kadhimi was hit in an apparent drone attack, Iraqi officials said. The military has described the strike as an assassination attempt.

The prime minister is "in good health" and was unharmed in the strike, the military and government said, describing the drone attack as an assassination attempt.

"The security forces are taking the necessary measures in connection with this failed attempt," a statement released by state-run media said.

Al-Kadhimi himself later appeared on state television to say he was unhurt and to condemn the attack.

What we know so far

According to a statement from the Iraqi military, the attack was carried out early on Sunday by an armed drone that was carrying explosives.

The drone targeted the prime minister's residence, which is located in the heavily-fortified Green Zone in the capital, Baghdad. Seven security guards were injured in the attack, two Iraqi officials told The Associated Press.

Two other drones were shot down before they could reach their target, the Iraqi interior ministry said.

Al-Kadhimi was not harmed in the attack, later taking to Twitter to appeal for calm.

"I'm fine, thank God among my people," the prime minister said, adding: "I call for calm and self-restraint from everyone for Iraq."

It was not immediately clear who was behind the attack.

The attack comes as supporters of several heavily armed pro-Iranian groups protested the result of Iraq's general election held last month. The demonstrations were staged near the entrance of the Green Zone.

Tensions escalated on Friday when a protester was killed after the demonstrators marched toward the Green Zone. Several members of the security forces were injured in an exchange of fire.

Al-Kadhimi has ordered an investigation into the cause of unrest. Authorities will also determine who violated orders not to open fire.

While international powers have praised the October 10 election, pro-Iranian groups faced a severe blow as the biggest losers. Supporters of the militias have since pitched tents near the Green Zone, which houses foreign embassies and government offices, and have demanded a recount.

Shiite cleric and Iran critic Moqtada al-Sadr, whose faction was seen as the major winner of the vote, condemned Sunday's "terrorist act."

Al-Kadhimi, who has been in power since May 2020, called last month's election following widespread and deadly anti-corruption protests that toppled his predecessor, Adil Abdul-Mahdi.

The United States has condemned Sunday's drone attack, referring to it as an "apparent act of terrorism."

"We are in close touch with the Iraqi security forces charged with upholding Iraq's sovereignty and independence and have offered our assistance as they investigate this attack," US Department of State spokesperson Ned Price said in a statement, expressing relief that al-Kadhimi was unharmed.

"Our commitment to our Iraqi partners is unshakeable," he added.