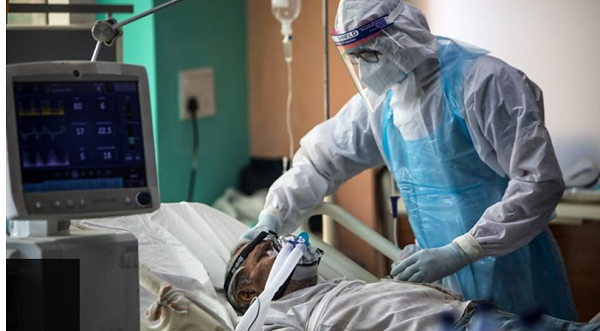 India coronavirus: "A Covid tsunami we had never seen before"
30.5k Shares

India's capital Delhi has announced a week-long lockdown after a record spike in cases overwhelmed the city's healthcare system.

Government offices and essential services, such as hospitals, pharmacies and grocers, will be open during the lockdown which starts on Monday.

The city had imposed a weekend curfew but reported its highest single-day spike so far on Sunday - 24, 462 cases.

India has been reeling from a deadly second wave since the start of April.

"I have always been against lockdowns, but this one will help us amplify the number of hospital beds in Delhi," Chief Minister Arvind Kejriwal said in a press conference on Monday.

He also appealed to the city's migrant workers not to leave - last year's national lockdown saw millions of them heading back to their villages after they found themselves unemployed and running out of money.

"This was a difficult decision to take but we had no other option left," Mr Kejriwal said. "I know when lockdowns are announced, daily-wage workers suffer and lose their jobs. But I appeal to them to not leave Delhi, it's a short lockdown and we will take care of you.

Religious places are allowed to open but cannot accept visitors.

Only 50 people will be allowed at weddings and up to 20 people at funerals.

All social, political and religious gatherings have been banned.

Sporting events without spectators are allowed.

Public transport like buses and the Metro will function with up to 50 per cent seating capacity.

Students appearing for examinations with valid documents will be allowed to travel.

Home delivery and takeaway of food by restaurants will be allowed.

People travelling for Covid-19 vaccinations or testing will be allowed if they have valid documents.

India has been reporting more than 200,000 cases daily since 15 April - this is well past its peak last year, when it was averaging around 93,000 cases a day.

Deaths too have been rising. India confirmed 1,620 deaths from the virus on Sunday.

On Monday UK Prime Minister Boris Johnson cancelled a planned trip to India in view of the situation. Mr Johnson and India's Prime Minister Narendra Modi will speak later this month to "launch ambitious plans for the future partnership", a statement said.

Maharashtra, which has India's financial hub Mumbai as its capital, remains the worst-hit state, accounting for a nearly a third of India's more than 1.9 million active cases.

But Delhi is the worst-hit city, confirming more cases daily than Mumbai in recent days.

Hospitals are struggling to accommodate Covid positive patients in Delhi and other badly hit cities such as Mumbai, Lucknow and Ahmedabad. Several states have been reporting an acute shortage of beds in Covid wards and ICUs.

Even test results are being delayed because of overwhelming demand, which, doctors say, is leading to people not getting diagnosed and treated in time.

Experts say the Indian government ignored warnings of a second wave and did little to prevent it or even contain it - they point to cricket matches attended by unmasked crowds, massive election rallies that appeared to flout basic Covid safety rules and a huge Hindu festival where millions congregated on the banks of the Ganges river earlier this month to take a holy dip.

Buoyed by a sharp dip in case numbers and the start of the vaccination drive, India began the year on what appeared to be a normal note. But things soon took a turn for the worse as people began leaving home more, wearing masks less and socialising in larger groups. The entry of variants and a lag in the vaccination drive only drove up infections further, experts say.

Within weeks, India shot to the top of the world's Covid chart, recording more cases daily than any other country.