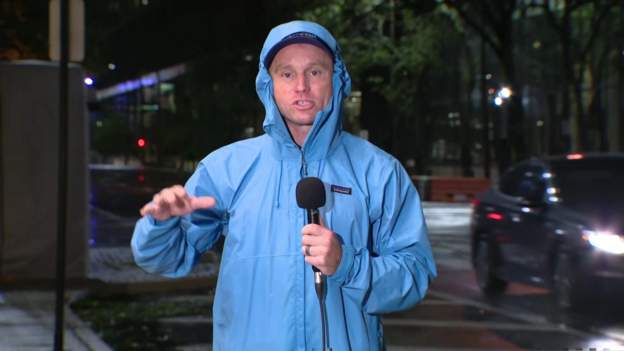 The powerful storm system, which is weakening, has brought severe flooding, winds and storms.

Hurricane Ian is now heading through central areas of Florida, raising concerns for theme parks around Orlando such as Disney World.

Jason Allen is a CBS correspondent reporting from Tampa, on the western side of the state.

He told the BBC that things were much calmer and drier where he is, but plenty of flash flood warnings were still in place.

He added that residents in eastern areas such as Daytona Beach were now braced for the storm and those trapped in flooded buildings further south, where the storm first hit, are still awaiting rescue.


Hurricanes are among the most violent storms on Earth and there’s evidence they’re getting more powerful.

So how do they form and what impact, if any, is climate change having?

Jacksonville International Airport, in north-east Florida, cancelled all of its flights scheduled for Thursday.

In a tweet, the airport said its terminal will be closed and passengers should contact their airline for rebooking options.

On Wednesday alone, some 1,961 flights within, into and out of the United States were cancelled, according to the website Flightaware.

The ferocious winds can clearly be heard as they whip the Florida coastline.

He tweeted: "I haven't experienced anything close to this in over 30 years."

Nasa is watching what's happening with Hurricane Ian very carefully - because it has delayed a launch to the International Space Station (ISS).

The Crew-5 mission with Nasa and SpaceX is taking a four-person crew to the ISS, and was originally meant to launch from the Kennedy Space Centre on Florida's east coast on Monday.

Nasa says it will now launch no earlier than 4 October.

“Mission teams will continue to monitor the impacts of Ian on the Space Coast and Nasa's Kennedy Space Center in Florida and could adjust the launch date again, as necessary,” the American space agency said in a blog post.