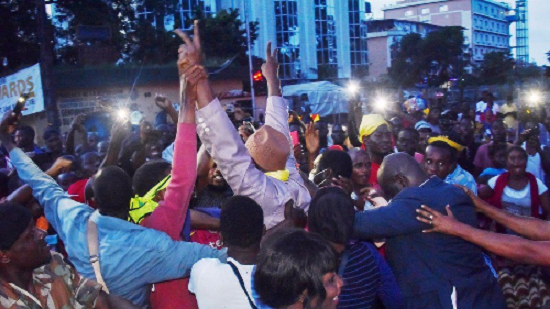 Coup leaders in Guinea have released about 80 political prisoners who had been detained under the ousted President Alpha Condé.

As the prisoners walked free, they were welcomed by crowds of cheering supporters.

Around 400 people had been imprisoned during protests in 2020.

There are indications that leaders of the West African regional body Ecowas will impose sanctions on Guinea when they meet later on Wednesday.

An elite army unit under the command of Lt Col Mamady Doumbouya seized power on Sunday. They detained Mr Condé, 83, and accused him of rampant corruption, human rights abuses and mismanagement.

His whereabouts remain unknown, although the coup leaders have said he is safe.

Many of those released were arrested last year during massive nationwide protests against Mr Condé's plan to stand for a third term.

The BBC's Alhassan Sillah in Conakry says the most prominent of the freed prisoners was Oumar Sylla, known as Foniké Mengué, who went on hunger strike last December.

"I feel free, free, free, thank you to the people," said Ismaël Condé, a member of the opposition UFDG party.

He said his time in prison had been difficult, but he was now hoping for a better future for his country:

On Tuesday, Guinea's main opposition leader expressed support for the coup, describing it as an opportunity for a new beginning.

Cellou Dalein Diallo said the army's junta was historic, but called on them to foster national reconciliation.

Guinea's coup is the fourth time West Africa has witnessed an attempt to undermine democracy in the region since August 2020.