Europe once again at epicentre of Covid, WHO warns 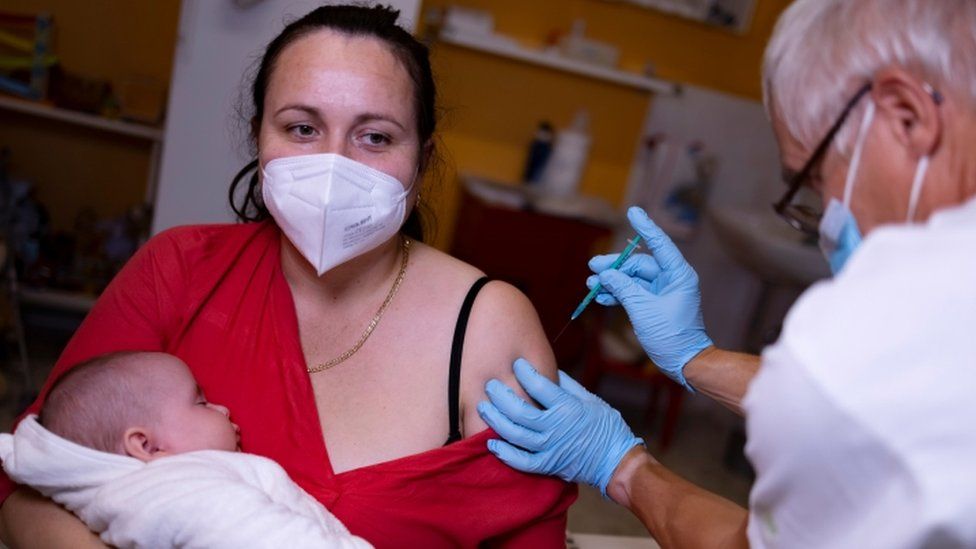 Vaccination rates have plateaued in Germany as cases rise

Europe is once again "at the epicentre" of the Covid pandemic, the World Health Organization (WHO) has warned, as cases soar across the continent.

At a press conference WHO Europe head Hans Kluge said the continent could see half a million more deaths by February.

He blamed insufficient vaccine take-up for the rise.

"We must change our tactics, from reacting to surges of Covid-19 to preventing them from happening in the first place," he said.

The rate of vaccination has slowed across the continent in recent months. While some 80% of people in Spain are double jabbed, that number is lower in France and Germany - at 68% and 66% respectively - and lower still in some central and eastern European countries. Only 32% of Russians were fully vaccinated by October 2021.

Mr Kluge also blamed a relaxation of public health measures for rising infections in the WHO's European region, which covers 53 countries including parts of Central Asia. So far the WHO has recorded 1.4 million deaths across the region.

The WHO's technical lead on Covid-19, Maria Van Kerkhove, said over the past four weeks cases across Europe had soared over 55%, despite an "ample supply of vaccines and tools", and colleague Dr Mike Ryan said Europe's experience was a "warning shot for the world".

It came as Germany recorded almost 34,000 daily Covid cases in the past 24 hours, a record rise.

While the Covid numbers in Germany are below the UK's latest daily case numbers of more than 37,000, public health officials are worried that a fourth wave of infection could lead to a large number of deaths and pressure on the health system. In the past 24 hours 165 deaths have been recorded, up from 126 a week ago.

Lothar Wieler of Germany's RKI institute spoke of terrifying numbers. "If we don't take counter-measures now, this fourth wave will bring yet more suffering," he said. Among the many Germans who have not been vaccinated are more than three million over-60s, seen at particular risk.

But as Hans Kluge pointed out, the surge in cases is not confined to Germany.

The most dramatic rises in fatalities have been in the past week in Russia, where more than 8,100 deaths were recorded, and Ukraine, with 3,800 deaths. Both countries have very low rates of vaccination and Ukraine announced a record 27,377 new cases in the past 24 hours.

Romania recorded its highest number of deaths in 24 hours this week at 591 while in Hungary, daily Covid infections have more than doubled in the past week to 6,268. Mask-wearing is only required on public transport and in hospitals.

"At the moment we seem to be hell-bent on a course that says the pandemic is over, we just need to vaccinate a few more people. That is not the case," said Dr Ryan, who called for every country to plug the holes in their response.

This week the Dutch government said it would reimpose mask-wearing and social distancing in many public settings as it emerged that hospital admissions had gone up 31% in a week.

Latvia meanwhile is imposing a three-month state of emergency from Monday amid a record level of Covid infection.

Croatia recorded 6,310 new cases on Thursday, its highest number so far. Slovakia has reported its second highest number of cases and Czech infections have returned to levels last seen in spring.

England's deputy chief medical officer Prof Jonathan Van-Tam said on Wednesday that too many people believed the pandemic was over.

However, in countries with the highest vaccination rates, infection rates are still relatively low.

Italy has one of the highest vaccination rates for over-12s but even here new cases are up 16.6% in the past week.

Portuguese infections have risen above 1,000 for the first time since September. Spain is one of the few countries not to see a rise in transmission with 2,287 cases reported on Wednesday.