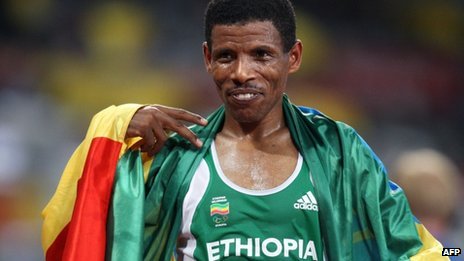 Ethiopian athletics star Haile Gebrselassie says he is entering politics with the aim of winning a parliamentary seat in the 2015 election.

The 40-year-old's announcement follows long-standing rumours that his athletics career is drawing to a close.

Mr Haile, a two-time Olympic 10,000m champion, is regarded as a national icon by most Ethiopians.

He has not said under which party's banner he will contest the election.

Ethiopia's parliament is dominated by the ruling Ethiopian People's Revolutionary Democratic Front (EPRDF). It has only one opposition MP.

"A lot of messages in the news about me going into politics," Mr Haile said on Twitter.

"Yes, I want to be in the parliament in 2015 to help my country to move forward."

He officially announced his retirement in 2010 but then went on to compete in races after recovering from a knee injury.

In April, he won his third consecutive Vienna half marathon and also took part in the Boston marathon, which was hit by a double bomb attack that killed three people.

The EPRDF is accused by rights groups of leading a highly repressive regime, using anti-terrorism law as a pretext to imprison opposition activists and journalists.