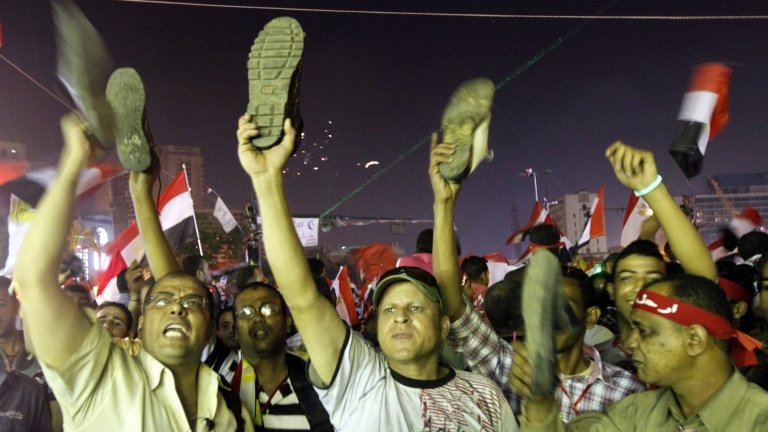 Tensions are high in Egypt as an army ultimatum for President Mohammed Morsi to resolve deadly unrest approaches.

Clashes broke out at rival protests across the country overnight, with at least 16 pro-Morsi protesters killed at a demonstration at Cairo University.

The army has said it will shed its blood to defend Egypt against "any terrorist, radical or fool".

Mr Morsi insists he is the legitimate leader and will not give in to "violence and thuggery" by resigning.

In a defiant televised speech on Tuesday evening, he too said he would give his life to defend constitutional legitimacy, and blamed the unrest on corruption and remnants of the ousted regime of Hosni Mubarak.

Calling for protesters to respect the rule of law, he urged the establishment of a committee of reconciliation as well as a charter of ethics for the media, and said he was prepared to meet all groups and individuals as part of a national dialogue process.

The army has given a deadline of around 16:30 local time (14:30 GMT) on Wednesday for the crisis to be dealt with.

In a statement posted on its Facebook page after Mr Morsi's speech was broadcast - under the title, "Final Hours" - it said: "We swear to God that we will sacrifice even our blood for Egypt and its people, to defend them against any terrorist, radical or fool."

Media reports say the army's plan includes the outline for new presidential elections, the suspension of the new constitution and the dissolution of parliament.

However one military source told Reuters those reports were not true, and that the deadline would mark the beginning of talks about what should be done next.

On Tuesday, Mr Morsi met the head of the armed forces, Gen Abdel Fattah al-Sisi, for a second consecutive day. No details of the talks, which also included Prime Minister Hisham Qandil, were released.

Military sources earlier told the BBC the president's position was becoming "weaker" with every passing minute and suggested that, under the draft plan, he could be replaced by a council of cross-party civilians and technocrats ahead of new elections.

The president was put under further pressure by the resignation of six ministers from his government on Monday, including Foreign Minister Kamel Amr.

But anger has been growing against him and the Muslim Brotherhood - the party from which he comes. Protesters are angry at the lack of development in post-revolution Egypt - they accuse the Brotherhood of trying to protect its own interests and of pushing an Islamist agenda.

"This is a president threatening his own people. We don't consider him the president of Egypt," said Mohammed Abdelaziz, a leader of the Tamarod (Rebel) campaign, a rapidly growing anti-Morsi opposition movement.

However, Mr Morsi and the Brotherhood still have significant public support, and both sides have drawn huge numbers to rallies in recent days.

Thousands gathered in Tahrir Square in central Cairo on Tuesday afternoon to demand Mr Morsi step down. There were outbreaks of violence in several parts of the capital, with casualties reported at hospitals in the north, south and centre of Cairo.

In the largest unrest, at least 16 people were killed and about 200 wounded at Cairo University in Giza. Eyewitness Mostafa Abdelnasser told AFP that Morsi supporters had come under attack from unidentified men carrying firearms.

Crowds began gathering in Tahrir Square again on Wednesday morning, with numbers expected to rise throughout the day.

In the wake of the latest unrest, the UK Foreign Office has changed its travel advice for Egypt recommending against all but essential travel to the country except for resorts on the Red Sea in South Sinai and in the Red Sea governorate.

The instability has also hit global oil prices, sending US light crude above $100 a barrel for the first time since September last year, amid concerns supply routes through the Suez Canal could be affected.