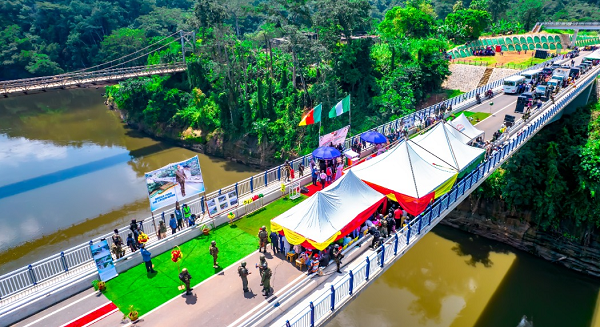 The ECOWAS Commission has handed over the Ekok-Mfum Joint Border Post (JBP) to Nigeria and following its successful completion with financial support from the African Development Bank.

Speaking at the handover ceremony, Mr Douka highlighted the uniqueness of the two iconic projects (the JBP and the Border Bridge) as they connect the two Regional Economic Communities (RECs) of ECOWAS and ECCAS and serve as a key peace-building facility between the Federal Republic of Nigeria and the Republic of Cameroon, implemented under the ECOWAS Transport Facilitation Programme.

In his welcome address, Mr. Babatunde Raji Fashola San, Minister of Works and Housing of the Federal Republic of Nigeria, underscored the importance of the Border Bridge and the JBP to the Trans-African Highway from Praia in Cabo Verde through Dakar in Senegal, Lagos connecting through Central Africa to end at Mombasa in Kenya.

The minister commended all the Engineers that worked on the project and the people of the Community for providing a peaceful environment for the projects to be completed.

The Minister of State for Foreign Affairs of Nigeria, Amb. Zubairu Dada, who represented President of the Federal Republic of Nigeria, Mr Muhammadu Buhari, stressed the importance of cooperation between African countries, saying “This project, which is part of the Nigeria/Cameroon Multinational Highway and Transport Facilitation Programme (NCMH&TFP), will remain a visible testament to the continuing cooperation and good neighbourliness between our two countries, as well as Regional Economic Communities. This bridge, and Joint Border Post, are proofs that when African countries work with African Institutions, outstanding and people-centred cross-regional developmental projects can be achieved in record time.”


In his remarks, the President of the Republic of Cameroon, Mr Paul Biya, who was represented by Mr. Emmanuel Nganou Njoumessi, the Minister of Public Works of Cameroon underscored that the successful completion of the bridge and the JBP shows successful cooperation between Nigeria and Cameroon.

He added that the border bridge and the JBP will reduce transit time and enhance trade between the two countries. He congratulated the ECOWAS and ECCAS Secretariats for successfully coordinating the implementation of the two integration projects.

The ECOWAS Commission, with financial support from the African Development Bank (AfDB), drew up a Joint Programme aimed at improving road infrastructure and facilitating trade and transport along the Enugu-Bamenda Corridor.

The programme consisted of rehabilitated and constructed about 455km of roads on both sides, establishment of a Joint Border Post (JBP) and bridge over the cross-border river, the natural boundary line between the two countries, bridge.

The main objective was to enhance movement of people and goods by removing non-tariff barriers hampering trade and transit. The JBP was constructed with a Grant of UA16.16 million (USD$26.575 million) from the AfDB, and counterpart funding from the ECOWAS Commission, who coordinated the overall implementation of the programme of the JBP, the Border Bridge and road improvements with close collaboration of ECCAS.

The launch of this JBP is expected to help increase trade and strengthen cooperation between countries of the Economic Community of Central African States (ECCAS) and those of the Economic Community of West African States (ECOWAS) in general, and between Cameroon and Nigeria, in particular. The JBP connects to the newly commissioned 400-meter border bridge (and approach roads) on the Cross River, constructed under the same Corridor.