Desmond Tutu: Body of South African hero to be aquamated 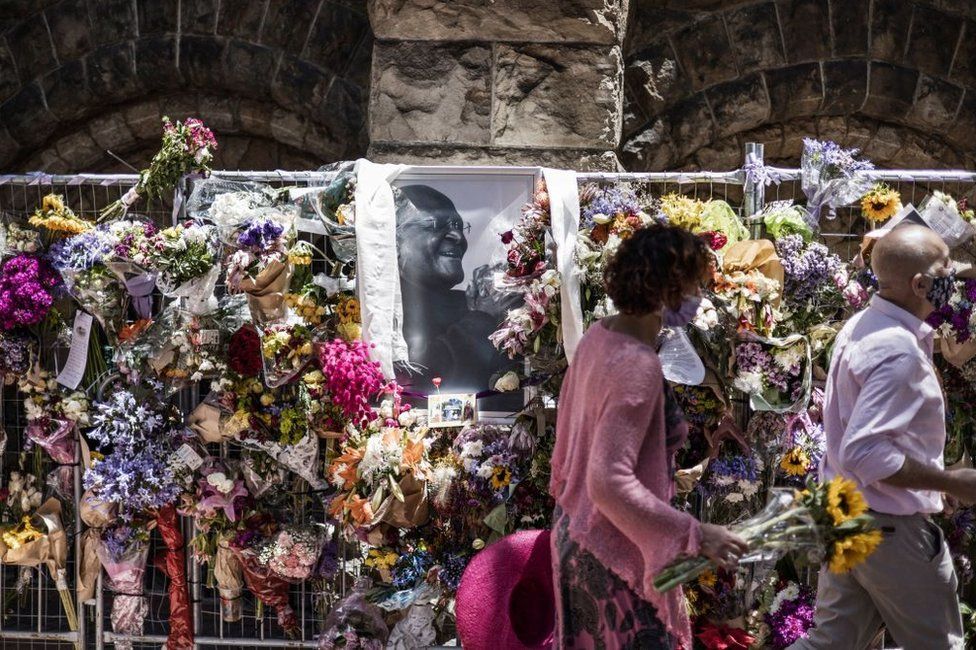 The late anti-apartheid campaigner Archbishop Desmond Tutu is to be aquamated - a process using water that is described as an environmentally friendly alternative to cremation.

It was "what he aspired to as an eco-warrior," said Very Rev Michael Weeder.

Thousands of South Africans have been paying their last respects at St George's Cathedral in Cape Town where Tutu's body has been lying in state.

There has been an outpouring of emotion since his death a week ago aged 90.

One man, Wally Mdluli, hitchhiked more than 1,000km (620 miles) from Bloemfontein to Cape Town - enlisting the help of family and friends to pay for some of the trip and even sleeping at a petrol station on the way.

"I feel fulfilled after I saw the coffin. It's like his spirit is in me," he told the BBC's Nomsa Maseko in Cape Town.

"It's a memory [I will have] for the rest of my life," Mr Mdluli added, saying he hoped that he and all South Africans would live according to Tutu's values.

Archbishop Desmond Tutu's burial is expected to take place this weekend. It is not yet known whether his family will opt for a private or public ceremony.

He had insisted there should be "no ostentatiousness or lavish spending" on the ceremony and that he be given "the cheapest available coffin", with the only flowers in the cathedral to be "a bouquet of carnations from his family", according to the Archbishop Tutu IP Trust and the Desmond and Leah Tutu Legacy Foundation.

His ashes are to be interred behind the pulpit at St George's Cathedral in Cape Town - the Anglican diocese he served as Archbishop for 35 years.

The technical name for the process is alkaline hydrolysis - and it involves weighing the body, then heating it to 150C (300F) in a mixture of potassium hydroxide and water for up to 90 minutes.

This dissolves the body tissue, leaving only the bones - which are then rinsed at 120C, dried, and pulverised into a coarse powder using a machine called a cremulator.

Once all these steps are complete, the remains can be buried or scattered in accordance with the deceased's wishes - just as would happen in an ordinary cremation.