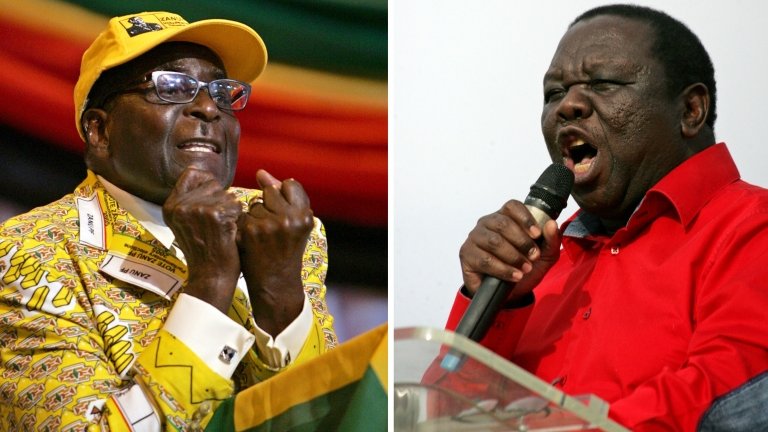 Vote counting has begun in Zimbabwe's presidential and parliamentary elections.

Some polling stations remained open into the evening to allow those already queuing at closing time to cast votes.

Mr Mugabe, 89, has said he will step down after 33 years in power if he and his party lose. Zanu-PF denied MDC claims it doctored the electoral roll.

African Union (AU) observers have described the voting as "orderly and peaceful".

However, as polling stations closed, police warned they would take action against anyone trying to leak early results.

Zanu-PF and the MDC have shared an uneasy coalition government since 2009 under a deal brokered to end the deadly violence that erupted after a disputed presidential poll the previous year.

However, because of the high turnout election officials said people who were still waiting in queues to vote by 19:00 had until midnight to cast their ballots.

Results are due within five days.

To be declared a winner, a presidential candidate must win more than 50% of the vote. If no candidate reaches this mark, a run-off will be held on 11 September.

The elections were the first to be held under the new constitution approved in a referendum in March this year.

The government barred Western observers from monitoring Wednesday's elections, but the AU and the Southern African Development Community (SADC), as well as local organisations, have been accredited.

Zimbabwe Election Support Network, the main domestic monitoring agency, said the vote appeared to have taken place without too many problems.

"There are some concerns around long queues, but generally it's smooth," said its spokesman Thabani Nyoni.

"It's been quiet, it's been orderly. The first place I called in this morning, they opened prompt at seven o'clock and there haven't been any serious incidents that... would not reflect the will of the people." he told Reuters.

At a news conference as polls closed, police spokeswoman Charity Charamba warned that "all people who may wish to announce the results of elections before the ZEC (Zimbabwe Electoral Commission) does... risk being arrested". 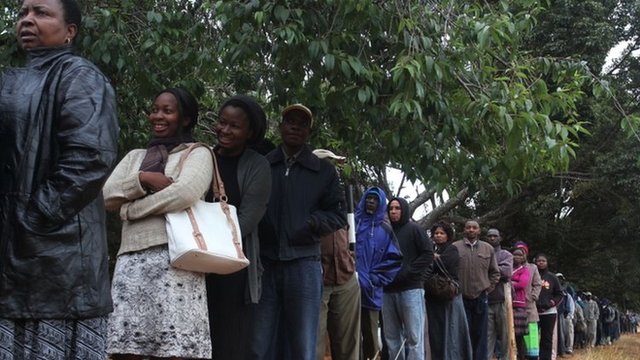 There have been numerous complaints that voters were unable to find their names on the electoral roll.

According to villagers, MDC polling agents and local election observers, some irregularities were recorded in parts of rural Masvingo district.

And on Tuesday, the MDC accused Zanu-PF of doctoring the roll of registered voters, which was released by the ZEC only on the eve of the polls after weeks of delay.

The MDC claimed the roll dated back to 1985 and was full of anomalies.

A BBC correspondent has seen the document and says it features the names of thousands of dead people.

MDC Secretary-General Tendai Biti said there were as many as two million such names, while some genuine voters were not finding their names on the rolls.

"The greatest worry which we have is the number of persons that are being turned away," he added.

A Zanu-PF spokesman denied the allegations and pointed out that appointees from both parties were on Zec.

He also accused Mr Biti, who is finance minister, of not funding the commission properly. Zec has not commented.

In addition to Mr Mugabe and Mr Tsvangirai, there are three other candidates standing for the presidency - Welshman Ncube, leader of the breakaway MDC-Mutambara; Dumiso Dabengwa of the Zimbabwe African People's Union (Zapu), and Kisinoti Munodei Mukwazhe, who represents the small Zimbabwe Development Party (ZDP).