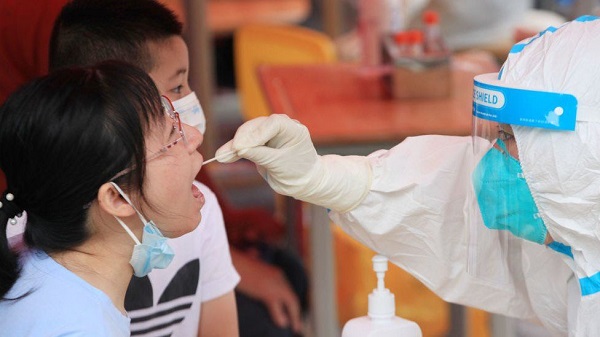 A Covid outbreak first discovered in the Chinese city of Nanjing has spread to five provinces and Beijing, with state media calling it the "most extensive contagion after Wuhan".

Almost 200 people have been infected since the virus was first detected at the city's busy airport on 20 July.

All flights from Nanjing airport will be suspended until 11 August, said the Global Times quoting a source.

Officials also began city-wide testing amid criticism for their "failure".

All 9.3 million of the city's residents, including those visiting, will be tested, said Xinhua news.

Officials believe the current outbreak is linked to the highly infectious Delta variant of the virus and has spread further due to the fact that it was detected at a busy airport.

The airport management has been rebuked, with a senior disciplinary body of the Communist Party saying it had "problems such as lack of supervision and unprofessional management".

Testing has shown that the virus has now spread to at least 13 cities including Chengdu and the capital Beijing.

However, experts quoted by the Global Times said they believed the outbreak was still at an early stage and could be controlled.

Local officials in Nanjing said that seven of those infected are in critical condition. The new spike in cases has led some on Chinese social media to speculate about whether the Chinese vaccines are working against the Delta variant.

It is unclear if those infected were vaccinated.

A number of South East Asian countries relying on Chinese vaccines have recently announced they will use other jabs.

China has so far managed to keep the virus largely under control by closing borders and moving quickly to stamp out local outbreaks.