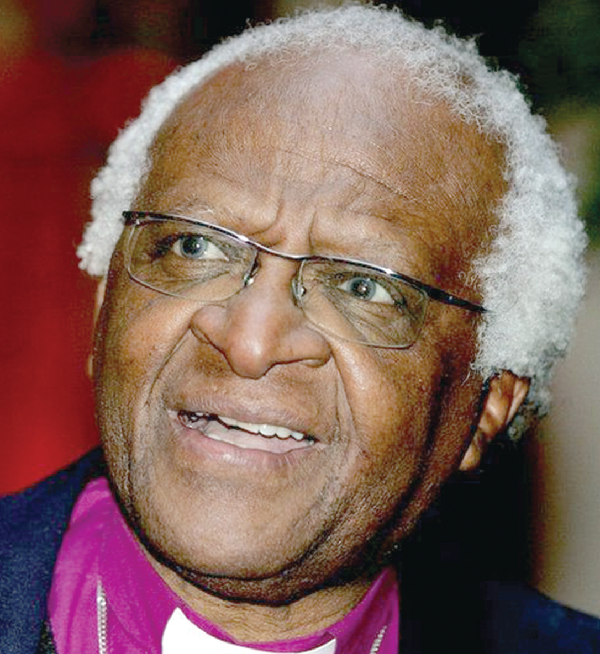 The tireless antiapartheid icon, Nobel Peace laureate Archbishop Desmond Tutu, who died peacefully aged 90 on Boxing Day, December 26, 2021, has been aquamated and his ashes interred inside his stonewalled former parish where he preached for many years and where bells have been ringing in his memory for 10 minutes at midday every day since his demise.

The body of Nobel laureate was reduced to dust by aquamation, a new cremation method using water that funerary parlours describe as environmentally friendly.

Before the cremation, the body of the late Archbishop was laid in state for two days, from last Thursday to Friday at the historic cathedral, Anglican Church's St George's Cathedral in Cape Town where he once railed against white rule, to allow South Africans to bid farewell to the much loved clergy and rights advocate.

Family members gathered to say their goodbyes to antiapartheid hero Desmond Tutu at a private service at St George's Cathedral on Sunday, where his ashes were interred in Cape Town and laid to rest on News Year’s Day.

Aquamation, or alkaline hydrolysis, consists of cremation by water rather than fire.

As per the process, the deceased's body is immersed for three to four hours in a mixture of water and a strong alkali like potassium hydroxide in a pressurised metal cylinder and heated to around 150 degrees celsius.

Through the process, the entire body is liquified, except for the bones.

The bones are dried in an oven and then reduced to dust.

Following the death of Desmond Tutu, an uncompromising foe of apartheid and a modern-day activist for racial justice and LGBT rights, South Africans, world leaders and people around the globe mourned the death of the man viewed as the country's moral conscience and as the world continue to mourn the man, who had largely faded from public life in recent years, here’s a look at his many contributions — above all his fight against injustices of all colours.

Archbishop Tutu was one of the driving forces behind the anti-apartheid movement in South Africa.

A contemporary of anti-apartheid icon Nelson Mandela, he was one of the driving forces behind the movement to end the policy of racial segregation and discrimination enforced by the white minority government against the black majority in South Africa from 1948 until 1991.

Clerics carry the coffin after the funeral for Anglican Archbishop Desmond Tutu at St. George's Cathedral in Cape Town, South Africa, on Jan 1

As an activist, he stressed non-violent protest and foreign economic pressure to bring about universal suffrage.

Tutu wasn't afraid of calling it as it was

In an address in the '80s, he had accused Western nations of hypocrisy for condemning armed liberation groups in southern Africa while they had praised similar organisations operating in Europe during the Second World War.

Tutu travelled the world, talking of the need for apartheid to end in South Africa and in March 1981, he embarked on a five-week tour of Europe and North America, meeting politicians including the UN Secretary-General, Kurt Waldheim, and addressing the UN Special Committee Against Apartheid.

Tutu remained actively involved in acts of civil disobedience against the government and in August 1989 he helped to organise an "Ecumenical Defiance Service" at St George's Cathedral, and shortly after joined protests at segregated beaches outside Cape Town.

Chair of the TRC

When Nelson Mandela was elected as the nation’s first Black president in 1994, he appointed Tutu chairperson of the Truth & Reconciliation Commission — to investigate crimes committed by both whites and blacks during the apartheid era.

The TRC was described as the “climax of Tutu’s career” and lauded across the world as a pioneering effort to heal deep historical wounds.

In the TRC, Tutu advocated "restorative justice," something which he considered characteristic of traditional African jurisprudence.

The first hearing came off in April 1996.

The hearings were publicly televised and had a considerable impact on South African society.

He had very little control over the committee responsible for granting amnesty, instead chairing the committee which heard accounts of human rights abuses perpetrated by both anti-apartheid and apartheid figures.

He presented the five-volume TRC report to Mandela in a public ceremony in Pretoria in October 1998.

Ultimately, Tutu was pleased with the TRC's achievement, believing that it would aid long-term reconciliation, although recognised its shortcomings.

From his struggle against apartheid to promoting LGBT rights, Desmond Tutu’s contributions to South Africa can’t be forgotten.

Tutu, or as he was popularly known as 'The Arch', was a true proponent of equality. He campaigned internationally for human rights,especially LGBT rights and same-sex marriage.

"I would not worship a God who is homophobic and that is how deeply I feel about this," he had said in 2013, launching a campaign for LGBT rights in Cape Town.

Tutu said he was as passionate about this campaign (for LGBT rights) as he ever was about apartheid.

He was one of the most prominent religious leaders to advocate LGBT rights.

Tutu's very public stance for LGBT rights put him at odds with many in South Africa and across the continent as well as within the Anglican Church.

Tutu also spoke out on the need to combat the HIV/AIDS pandemic, in June 2003 stating that "Apartheid tried to destroy our people and apartheid failed.

If we don't act against HIV-AIDS, it may succeed, for it is already decimating our population.

Tutu was happiest when active on behalf of others, his friends say.

As he had told the BBC’s Sue Lawley when appearing on Desert Island Discs in 1994, "I love to be loved."

He will be loved and the world can never forget his contributions.

It is learnt that Nobel Peace laureate Archbishop Desmond Tutu, who passed away on 26 December, had requested that his funeral not be ostentatious and that his body should not be cremated by flame.

It is not surprising as the antiapartheid hero was a huge champion of the environment and spoke frequently of the perils of climate change, which he once called among the “greatest moral challenges of our time”.

He advocated boycotts of oil and fossil fuel-producing firms and called for greater investment in clean energy and low-carbon products.

He also sought to amplify the voices of young climate activists.

He gave many speeches and wrote many articles about the need to act to tackle the climate crisis. In 2007, he wrote a piece titled : "This Fatal Complacency" for the Guardian in which he addressed the worrying impact that climate change was having in the global south and on poor communities.

Archbishop Desmond Tutu – What He Taught Me

We came down to check out from our hotel rooms.

We got our bills and I quickly looked at the total and okayed mine.

Archbishop Tutu was meticulously going through his bill line by line and item by item.

He turned and looked at my bemused face.

His lips patted the familiar broad smile and leaning towards me said: “… because I am a Bishop, is it unbecoming of me to scrutinise my bill?” He asked for the desk manager and pointed errors in his bill and the manager agreed and apologised.

Bishop Tutu put an arm on my shoulder and whispered into my ear: “You see!”

Eminent panellists of the erstwhile Peacemaker Award, including former Presidents Mary Robinson of Ireland and Óscar Arias of Costa Rica, together with Bishop Tutu and others, had gathered at the UN Headquarters in New York, in 2004, under the auspices of Tribute Inspirations and University for Peace, to deliberate on the Award criteria and selection process.

It was TRIBUTE, in collaboration with Archbishop Trevor Huddleston, that galvanised global demand for the release of Nelson Mandela with the FREE MANDELA multimedia campaigning concert in June 1988 at London’s Wembley Stadium which was broadcast live to over 60 countries and an audience of 600 million.

It remains one of the great privileges of my life that I got to know Desmond Tutu and spend time with him.

There was the day in Soweto, a very difficult day, when I ended up taking refuge in his Soweto home.

Then there was the interview at the Archbishop's home in Cape Town and the invitation to lunch afterwards.

I remember seeing him break into tears and thinking this is a man with a heart above all.