Biden reaches out to tornado-hit US states 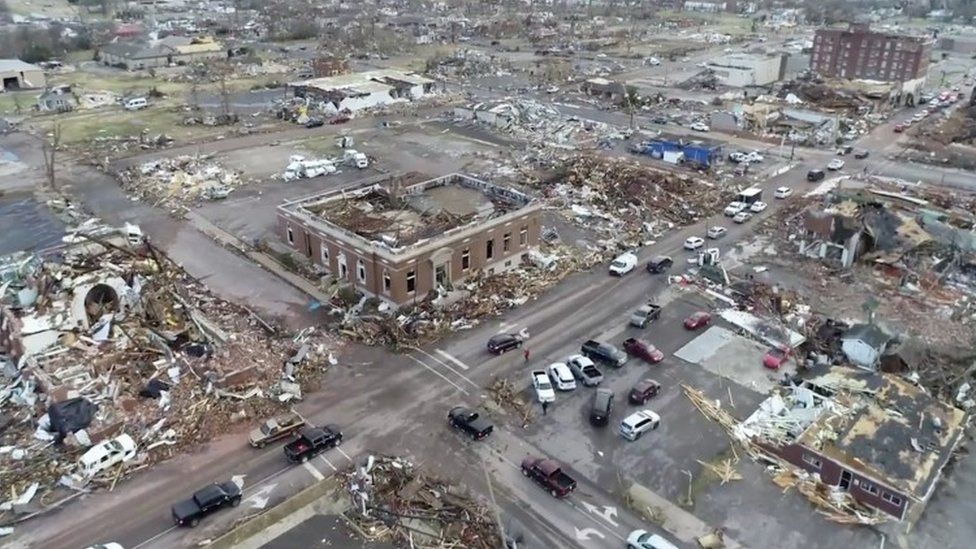 US President Joe Biden has said the government will do everything it possibly can to help central areas of the country devastated by tornadoes.

He said the storms were among the largest in US history.

More than 70 people died in Kentucky in Friday night's storms, including dozens in a candle factory, and the death toll is expected to rise above 100.

Emergency teams are searching through the rubble of the factory, in the town of Mayfield, which was hit directly.

More than 40 people have been rescued out of some 110 in the factory but Kentucky Governor Andy Beshear said it would be a miracle if anyone else was found alive.

The conditions facing the authorities are hugely challenging, with the police station in Mayfield destroyed and firefighters' equipment damaged.

Tens of thousands of people in the state are also without power and water.

At least 12 people died as tornadoes wreaked havoc in other states, including six in an Amazon warehouse in Illinois.

Mr Biden said he was praying for those who had lost, or who were uncertain about, their loved ones.

"The federal government will do everything it can possibly do to help," he said. "We're going to get through this together."

The president said teams from the emergency agency Fema would go to Kentucky on Sunday to offer additional resources including help with temporary housing for those whose homes had been destroyed or badly damaged.

Emergency funds were also available for the other affected states - Missouri, Arkansas, Illinois, Tennessee and Mississippi - if they needed it, he said.

Governor Beshear has declared a state of emergency in Kentucky. He said Mayfield and everywhere along the 227-mile (365-km) path of the tornado - almost all in Kentucky - were devastated.

"It's indescribable, unlike anything I've ever seen," he said. "You see parts of industrial buildings, roofs, or sightings in trees, if trees are lucky enough to stand.

"Huge metal poles bent in half if not broken, buildings that are no longer there, huge trucks that have been picked up and thrown. And sadly far too many homes that people were likely in, entirely devastated."

"There are a lot of families that need your prayers," he added.

Deaths had been reported in several counties, but the loss of life in the Mayfield factory could exceed that of any tornado event in a single location in state history, the governor added.

Mr Beshear said it was a "very dire situation" at the factory, with the difficulties of searching through the collapsed building compounded by drums leaking corrosive liquid.

Other incidents in Kentucky included a train derailment during extreme winds in Hopkins County.

Local officials also described how two children were reported missing during a tornado but were then found in a bathtub that had been pulled outside by the force of the wind.

The Amazon warehouse in Edwardsville in southern Illinois was damaged by another tornado, officials there said.

Illinois police chief Mike Fillback said six people had died, adding that it was still unknown how many workers were missing.

Tennessee state Emergency Management Agency spokesman Dean Flener said three people had been killed in the northwest of the state. No further details were given.

Two people were killed in Arkansas, one of them in a nursing home after it partly collapsed. One death was confirmed in Missouri.