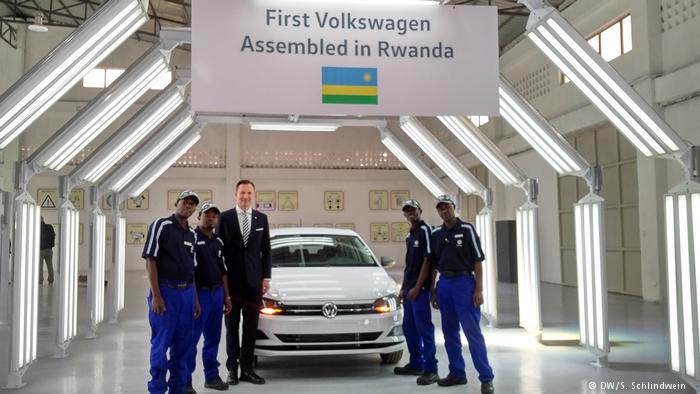 Gridlock is a challenge for fast-growing urban Africa, where the middle class is acquiring more cars. In Rwanda, the German car maker Volkswagen is trying out an alternative transport system

, buses and motorcycle taxis - the stream pushes forward – bumper to bumper – at a snail's pace.  A typical traffic jam in Rwanda's capital Kigali in the morning and evening rush hours.

In Nyabugogo, where the central bus and taxi terminus is located, the situation is particularly bad. Only one street lane is accessible. Excavation work is being carried out on the other, to widen the inner-city road. Along the roadside, houses lie in ruins and walls – half down – have made way for the ever-increasing traffic.

Traffic congestion is routine in Africa's capitals. Most cities were centrally planned during the colonial era, with office blocks in the city and workers resident in the suburbs. That means everyone pours into the inner city in the morning and out again in the evenings.

The roads are narrow, often with only a single lane and potholes the size of craters. There are few street lights or traffic management systems.

Cities such as Kenya's capital Nairobi, the Nigerian economic metropole of Lagos, or Uganda's capital Kampala are notorious for gridlock, where nothing often moves for hours at a time during peak hours. As a result, pollution in African cities is nearly as high as in the Asian megacities of Mumbai or Beijing.

Kigali is not immune. The government is seeking to prevent a total collapse of the traffic system. The "Smart City 2040" plan developed in 2013 envisages intelligent traffic management systems, underground bus terminals — a sophisticated public transport network. The government has included environment-friendly concepts such as bicycle lanes. A walkway with underground parking is already a feature of the financial district. At the start of the year, authorities introduced a law that makes provision for one car-free Sunday each month.

Volkswagen – mobility instead of private cars

Volkswagen (VW) opened its first plant in Rwanda on Wednesday, Jun 27, 2018. It is the German car maker's fourth plant in Africa, after South Africa, Nigeria and Kenya. The goal is that soon Rwanda's motorists will also be driving its Polo, Passat and off-road Teramont models.  To begin with, the car parts will arrive in Kigali via sea and road for assembly at the new VW plant.

The investment of €16 million is not aimed at the assembly of cars for private clients, says Thomas Schäfer, VW chief in South Africa, responsible for Africa. Instead, the first cars are intended for "community car-sharing."

"Firms, embassies or ministries can register as such and acquire a specific number of cars ready for use,” he says. The next 150 vehicles should be for "ride-tailing" – to be used as taxis linked to smartphone apps.