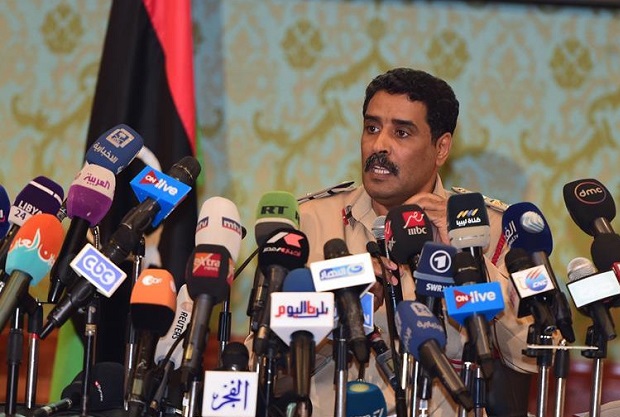 The Libyan spokesperson said he had documents proving involvement of the three countries of providing Libyan terror militias with logistic provisions, saying he will present the documents to the international community.

"All we need from the international community is to lift the arms embargo imposed on the Libyan army to fight terrorism," said the Libyan military spokesperson. He also said his army achieved progress and controlled vast areas in Libya despite fighting four major categories: the Islamic State (IS), al-Qaeda, Muslim Brotherhood group and criminal gangs which possess weapons and ammunition.

"In one week, we controlled three large air bases in central Libya," Mesmary said, adding that his army managed to completely destroy the IS in Benghazi.

He clarified that the IS presence in Libya is declining while the criminal gangs control large parts in Tripoli.

Mesmary said that those areas still outside the Libyan national army's control include the city of Sirte and the area between the cities of Misrata and Tripoli.

Six years after the 2011 uprising that ended the 42-year rule of Muammar Gaddafi as well as his life, Libya is currently engaged in a civil war and run by two rival administrations, one in the capital Tripoli and the other in Tobruk city in the east.

Tobruk's administration was internationally recognised, before the Libyan Presidential Council was established in 2015 to run a unity government in Tripoli based on a United Nations-brokered peace deal between Libyan factions reached in Skhirat, Morocco.

The United Nations said that the Libya's army needs to unify first in order for the UN Security Council to lift the arms embargo imposed since 2011. ­ XINHUA