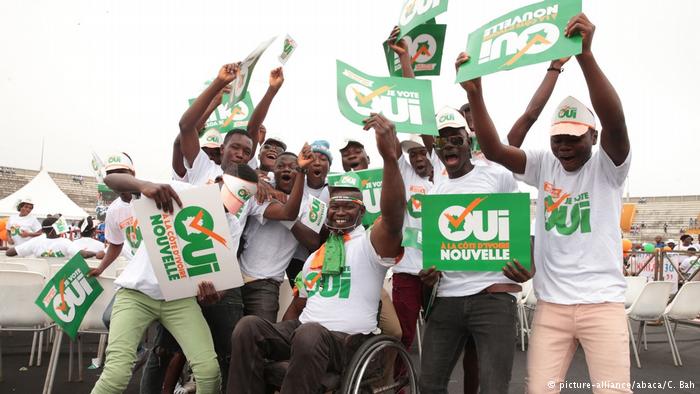 Electoral officials in Ivory Coast say the yes campaign has won Sunday's referendum on a new constitution, with 93.42% of the votes.

The turnout - 42.42% - is higher than an earlier 7% estimate by opposition parties that boycotted the polls.

Backed by President Alassane Ouattara, the change scraps a requirement that both parents of presidential candidates must be native-born Ivorians.

Opponents accuse Mr Ouattara of using it as a way to hand-pick his successor.

In the lead-up to the referendum, there were street protests by opposition supporters against the constitutional reforms.

On Monday, President Ouattara acknowledged that there were some disturbances during the vote, but said they were isolated incidents.

In one instance, youths destroyed some polling stations in the Abidjan district of Yopougon - a stronghold of the opposition Ivorian Popular Front.

The new constitution is billed by President Alassane Ouattara as an opportunity to turn a page on instability, mainly around the divisive issue of identity, which has fuelled decades of civil strife.

The new construction removes the age limit of 75 for those seeking to be elected to the post of president.

Mr Ouattara will be over the current age limit at the end of his current term. Initially, some of his critics accused him of trying to stay in power himself but the draft retains a ban on third terms so he cannot seek re-election.

• The position of a vice-president