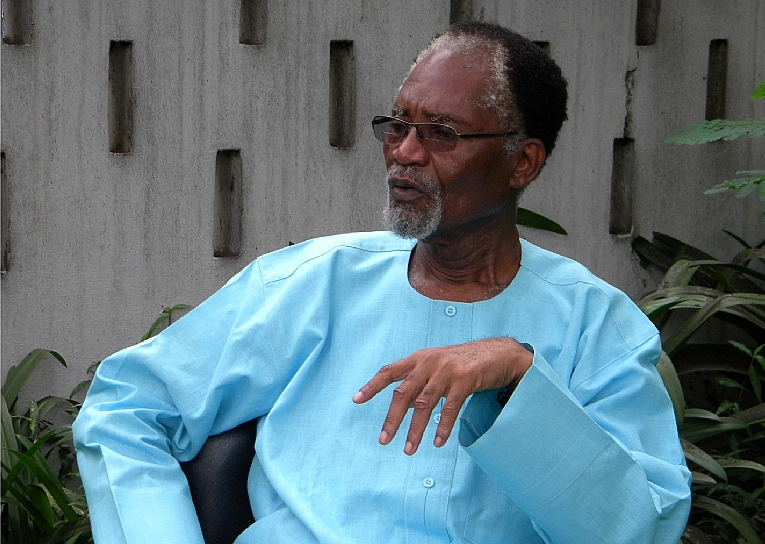 These were some of my instant reactions when at 9.30 p.m. on that fateful Friday a friend called and said he had heard that Professor Atukwei Okai had passed away.  I went into immediate denial and started to send WhatsApp messages asking friends whom I thought could confirm or deny the sad news.  It was a simple message, “Have you heard………. “

Responses started coming in one after another, confirming exactly what I did not want to hear.  What broke the camel’s back, for me, was when a friend, having confirmed, asked me to check graphic-on-line news portal where the story was trending then.  I went numb, and going to bed that night was a struggle.

Even till today, having witnessed his elaborate funeral only yesterday, I still find it difficult to accept that somebody who stood so tall in the world of poetry, so full of life and always wearing infectious smiles could leave the scene so soon.  Was he staging a play for us?  Was he at Act one, scene one?  No, rather, the stage had collapsed under his feet; death has snatched him away from the scene.  No more Logoligi Logarithms.

I got closer to the famous poet in the late 1990s when I bumped into him at the Editorial office of the Daily Graphic.  In conversation he told me that with my insight into corporate life and working with multinationals, I should consider writing on business issues, adding: “That is a specialty people would love to read”.  I thanked him and promised him I would.   “When are you starting?” became a regular question whenever I met him.

I got even closer to him and his family when our children got admitted to SOS Hermann Gmeiner College in Tema.  We used to meet at the college during weekend visiting time.   Then from 2010 to 2015, we came much closer when we both served on the Board of the Millennium Excellence Foundation, with him as the chairman.  We worked closely together to the extent that we even developed a friendly greeting, “I beg ooooo”.  Our meetings were delightful.  I never saw him angry or raise his voice over any issues, though there were many.

He was so full of humour and brought much fun into every situation.  I could not help but admire him.  I remember a visit we made to Manhyia Palace in Kumasi.  In an audience with the Asantehene, Otumfuo Osei-Tutu II,  he went into one of his best moments when, while on his feet to speak on behalf of the foundation, he managed to weave in a few lines from his famous “Logoligi Logarithms”.  He sent all the chiefs assembled cracking with laughter, putting everyone at ease.

Prof. Okai had a warm personality.  He was an imposing figure, a literary giant too sad to lose.  He brought smiles and laughter into the lives of those of us who got closer to him.  He came across as someone who did not have any dull moments of his own.

Our friendship matured with time and on my 60th birthday he sent me a gift of three of his books, A Slim Queen in a Palanquin, An Anthill in the Seas and Pawpaw on a Mango Tree, all duly autographed.  Since then, each time we met the question was: “When are we seeing your first book?”

So warm and affable, he genuinely took interest in the professional lives of people who showed interest in literary works and readily offered encouragement.  He was on WhatsApp with me and anytime he came across any reading on women empowerment and achievements he shared it with me.  He was a mentor par excellence.

The family, his wife Beatrice and his adorable daughters have indeed lost a gem, an irreplaceable husband and father.  He stood for peace and would quickly settle any disagreements before they became issues.  For him, saying sorry was a healing balm to any dissent; hence, the “I beg ooooo” greeting that we developed and exchanged whenever we met.

He came down to everyone’s level and treated people as his equals.  Quite a rare human being.

Atukwei Okai will remain in our hearts for a long time to come.