‘The voice from afar’ - A tribute to the iconic K.B. Asante 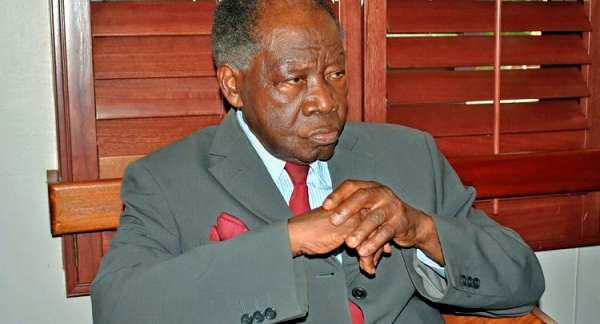 About ten years ago, I got an invitation from K.B. Asante to join him in celebrating his life at the Holy Trinity Anglican Church, Accra. Then in his regal eighties, he arrived on the premises dressed elegantly in the company of his dear wife. Speaking from the podium he said he was not about to wait to die for others to jump on the pulpit to talk for him.

He knew who he was, and was ready to tell his own story before the final curtain.

A fearless man, he was self-assured, secure in his core. Such wonderful traits I learned to love about him. You don’t choose a mentor by his shifting postures! Mr Asante’s conviction to speak his own truth reminded me of the daring French philosopher, Denis Diderot (1713 – 1784) who wrote: “I press myself; I wrest the truth from myself. Then it seems to me that I have a gay soul, tranquil, honest and serene.”

For the church service, a brochure had been duly printed narrating the time of his birth up to that time, adorned with a chronology of his various stations and deeds. [His death came so unexpectedly that it left me no room to find that brochure. But I will trace it in due course, and make a big deal about his accomplishments.]

At the reception I took pictures of him and his wife; but before the shots were taken he had warned me he did not take good pictures. I simply asked him to smile, and he did. I used one on the cover of my book, “Leadership: Reflections on some movers, shakers and thinkers”.

In a chapter devoted to him, I wrote: “Mr Asante boasts of an eminent Achimota College Class of 1942 that sported Professor Silas Dodu - the first Professor and Dean of Ghana Medical School; Professors Albert Tackie and Addo Kufour of KNUST; Victor Owusu – the great legal brain of the Okomfo Anokye Chambers [and a former Minister of Justice, and External Affairs]; Joe Reindorf – a former Attorney General; R.R. Amponsah [of the United Party tradition]; and Dr A.A. Armar of the Methodist Church; Dr J.I.T. Glover; D.Q. Annoh of Ghana Railways; and Ambassador Richard Akwei.”

With such gallant peers and pedigree he served as a mentor to many. I admired and loved him. And whenever our paths crossed, his lust for life and the resolve to engage fully were apparent. I had often planned to write a column titled “The Three Wise Men” featuring my former headmaster, Francis L. Bartels, Prof. Kwabena Nketia, and K.B. Asante. Three wonderfully selfless thinkers who - though miles ahead of me in age - still became my dear friends!

I got to know Mr Asante through his column, “Voice from Afar”, which appeared on the editorial page of the Daily Graphic every Monday. By the time his book of the same title came out, I was already a fan, and did a review of it.

In the review, I wrote: “To Mr Asante’s credit, his weekly columns contain faithful attempts to make the state safe. But in spite of its frank boldness, the book may find it hard to make men virtuous. Remember, saints and saucier prophets tried to redeem mankind, but to no avail. Recall Isaiah’s frustration: ‘Stop trusting in man, who has but a breath in his nostrils. Of what account is he?’”

Once we shared a dais at the Ghana Broadcasting Corporation, Accra, where we both spoke to launch a      GBC/Star-Ghana project titled: “Same Currriculum, Different Outcomes.” There I told him how he motivated me in writing my columns. He replied, “And you motivate me too.” To prove that point, he had quoted me in a piece titled “What is education?” (January 7,  2013):

“We may not be able to define education adequately but we know what we expect from an educated person. As Mr Anis Haffar put it in the Daily Graphic on Christmas Eve, the educated person should be able to address the things the new day requires; consider and resolve new challenges and anticipate future developments and requirements.” It was flattering to have caught the great man’s eye.

I’m ever grateful to my senior, Professor Anane Dzidzienyo, of Brown University, Rhode Island, who kept pestering me with emails and phone calls to arrange for him to meet “your friend” Mr Asante. When I finally arranged the meeting last year, Dzi – as we affectionately called him – came down from the United States.

That morning meeting on the veranda of Mr Asante’s house, near the Palm Wine Junction, Accra, was endearing and full of choice insights. [That was the last time I saw him.] I remember his instructions to the house: “Turn right at the Shell station. My house is on the left; you won’t miss it; it is the only house with plenty of trees on that road.”

A professor of Africana Studies at the Brown University, Dzi was particularly interested in the relationship between Ghana and Brazil, and the ambassadors at the time of Kwame Nkrumah. With the obligation of a historian, Mr Asante took his time and answered every question put to him. His memory was intact to his last year, at the age of 90 plus.

I learned from Mr Asante that everyone has a genius, a potent spirit: but it lay latent, to be discovered to bloom through the clarity of purpose and persistence. And what a reward! His spirit served him well.